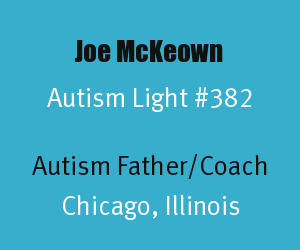 Joe McKeown has been a women's basketball coach since 1986. In June, 2008, Joe McKeown unexpectedly left his highly successful position as the women's basketball coach at George Washington University to take over as the coach for a struggling Northwestern program. His move was not to advance his career, but it was for his son Joey to have better educational opportunities available him in the Chicagoland area.


Those closest to McKeown knew his decision to take over Northwestern's long-struggling program had nothing to do with basketball. McKeown was leaving because his high school-bound son, Joey, had been diagnosed with autism and educational resources were lacking in Northern Virginia (The Washington Post, Gene Wang, February 28, 2015).

Being a coach in a rebuilding program is a challenge. After several average years at Northwestern, coach Joe McKeown had a breakthrough year in the 2014-2015 season where his team won 23 games and they were selected for a birth in the Women's NCAA Tournament, losing in the first round to Arkansas. During this season he passed 600 wins in his coaching career. Here is a video congratulating Joe McKeown on the milestone of 600 wins.

Autism Awareness:  In 2008, Joe McKeown brought a case to Congress to battle for autism awareness. Although he lost that fight with the government he was determined after that to do what he could to raise awareness as a coach (Northwestern Wears Blue for Autism, Chicago Talks, May 12, 2014).  Kaitlyn Cubacub wrote about the autism awareness legacy that Coach Joe McKeown brought with him to Northwestern in 2008,


This was wear Northwestern sports made their turnaround. The women's basketball team changed their game plan, it wasn't so much about winning anymore, it was deeper than a victory. Their mission now was to create autism awareness at every game they could. Whether it be wearing autism awareness pins or holding fundraisers throughout the season, the team made sure that every opportunity didn't go untouched (Kaitlyn Cubacub, Northwestern Wears Blue for Autism, Chicago Talks, May 12, 2014)

Under Coach Joe McKeown's leadership, the Northwestern University Women's Basketball Team has an annual Autism Awareness Game. During this home game the Northwestern fans are encouraged to wear blue for autism awareness. They also open the event to autism families in the Chicagoland to enjoy a special day with their kids in a wonderful atmosphere. In addition, the team participates with other Northwestern athletes in an annual walk for autism at Chicago's Soldier Field.


As a player, McKeown earned Junior College National Small Player of the Year honors at Mercer College in Trenton, N.J. He helped the team to a 33-1 record and a spot in the NJCAA Championship game. McKeown transferred to Kent State the following season, where was the co-captain of the Golden Flashes as a senior and earned honorable mention All-Mid-American Conference honors. His school-record 15 assists in a game still stands (Northwestern Sports, Joe McKeown Bio).


.@jasondorow writes that Joe McKeown has #Northwestern ready to compete on the big stage: http://t.co/mV65MELyov pic.twitter.com/Li2eZbtUKa
— Inside NU (@insidenu) March 3, 2015

On Dealing With Schools:  Joe McKeown said this about the difficulty faced by autism parents in educating their special needs children.


We've all fought over the years just trying to create awareness and trying to get the kids better opportunities and schools and not be pushed to the side. That's still our biggest fight. The principals and education systems. Every school you talk to is broke. Every state in the country is broke. The laws are there. It's just being able to enforce the laws and make sure these kids get the money that's supposed to be allocated (Joe McKeown as Quoted by Neil Hayes, November 23, 2012).

Other Information: You can read more about Joe McKeown and his work with autism in these online news stories:
Wikipedia: The Wikipedia Page for Joe McKeown has more information on his life and coaching career statistics.

Autism Light honors diverse heroes to the world of autism.
Posted by Alan Stokes at 8:12 PM