Autism Light #231 is The Honorable Reggie B. Walton. 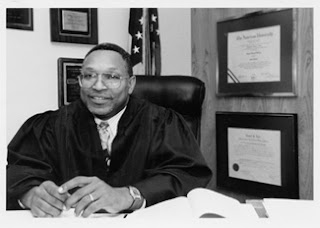 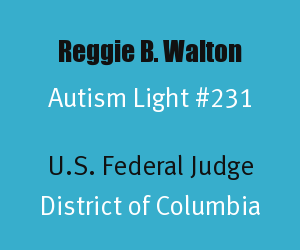 The Honorable Reggie B. Walton has served as the United States District Judge for the District of Columbia since October 29, 2001, having been nominated to the position by then President George W. Bush. Judge Walton is an Autism Light for his groundbreaking ruling on July 26, 2012, that will ease the path for military families to receive Applied Behavioral Analyis treatment for their children through their military health insurance known as TRICARE.

Reggie B. Walton earned his law degree from American University, Washington College of Law in 1974.  Judge Walton is a member of Alpha Phi Alpha fraternity.

On July 26, 2012, Judge Reggie B. Walton ruled that TRICARE, the health insurance program for United States active and retired military, must cover Applied Behavioral Analyis as a medically necessary therapy. The decision was in support of the plaintiffs in Civil Action No. 10-0373 in case known as Berge v. United States of America. Kenneth and Dawn Berge and a class of other impacted military families brought the Civil Action. The ruling will positively impact military dependents with autism who have basic TRICARE coverage and allow equal treatment for the autistic children of retired veterans as offered to active duty personnel.

Judge Walton's ruling explained the effectivness of ABA Therapy for autism treatment. The conclusion of the judgment report had this important ruling:


Because the Agency's denial of ABA therapy coverage under the Basic Program is arbitrary and capricious, the Agency must therefore be enjoined from denying qualified beneficiaries coverage on the ground that ABA Therapy is not a covered benefit under the TRICARE Basic Program. Thus, the Court will remand the case back to the Agency with instructions that ABA therapy coverage be provided to Basic Program beneficiaries who otherwise qualify for reimbursement and such reimbursement be provided in compliance with the applicable TRICARE guidelines for the expenses incurred by qualified beneficiaries to acquire ABA therapy for their children. Accordingly, for the foregoing reasons, the plantiffs' motion for summary judgment is granted and the defendants' cross-motion for summary judgment is denied (Source-The entire 66 page ruling can be read at this link).

To learn more about how this judgment impacts military families with autism read the news coverage at the following websites.
For more information about Judge Reggie B. Walton and his other judicial accomplishments besides this autism case visit his Wikipedia page or his official District Judge page.

On this Veteran's Day we salute Judge Walton for giving a ruling that will directly help military families with autism. His ruling may also establish a precedence for future victories regarding insurance coverage of ABA treatment. Thanks to The Honorable Reggie B. Walton the door has been opened and the future appears brighter for military families and veterans who have children with autism that need ABA treatment.

The photo of Judge Walton is in the Public Domain.
Posted by Alan Stokes at 9:49 PM