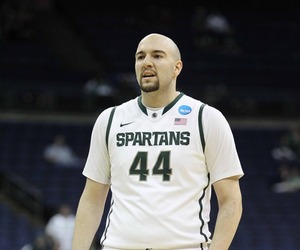 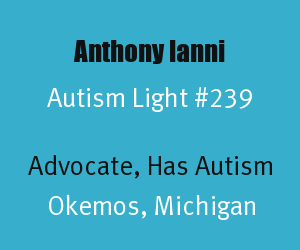 Anthony Ianni is from Okemos, Michigan. Anthony has autism and defied all odds by graduating last year from Michigan State University. While in college he was a member of the nationally recognized Michigan State Spartans Men's Basketball Team. Anthony Ianni has a mission to spread an anti-bullying message to people within and outside the autism community. After graduation, Anthony became the Community Relations Advocate for the Autism Alliance of Michigan. Anthony Ianni is an Autism Light for his advocacy for autism and the example he sets of the success one can have in life even though they may have autism.

Anthony Ianni's biography for the Autism Alliance of Michigan starts out with these words about his remarkable journey through his educational process while having autism.

Anthony was diagnosed with autism at 4 years of age. His parents were told by medical specialists and professionals that he would never be successful academically, that he would likely not graduate from high school much less go to college, and most likely would live in a group home in the future--and that being an athlete was out of the question. HE PROVED THEM WRONG! (Source-Autism Alliance of Michigan).

College: Anthony Ianni received his B.A. in sociology from Michigan State University in 2012.

Autism Light asked Anthony Ianni if he had any advice for students with autism and he said,

For kids who struggle in school and they have autism, don't ever quit or give up on yourself or your school work. I struggled a lot in school whether it was homework, quizzes, or tests I still worked very hard to get my degrees from Okemos High School and Michigan State University. If you need help ask your teachers and they will help you in every way possible. I had more than 50 teachers who taught me throughout my life and I stay in contact with basically every one of them because they mean that much to me and without them I would not be the person that I am today. They are in the schools to help you be successful and always take advantage of that. I know I did and they helped me become very successful. Most importantly though, never ever ever give up in school. If things are hard just remember that there's always somebody there to help you.

Basketball Player:  Anthony Ianni played for the Michigan State University Spartans Men's Basketball team for two seasons from 2010-2012. In 2011 he earned the Tim Bograkos Walk-On Award and in 2012 he received the MSU Unsung Player Award.  Draymond Green, a college teammate of Anthony's who now plays in the NBA, said to Anthony, "It doesn't matter if I end up playing for Miami, Boston, Indiana, Cleveland, Detroit, or Dallas, no matter who I go up against in practice, no body will work as hard against me in practice like you did."  You can read more about Anthony's athletic career on his page at the Michigan State athletic website or his ESPN stats page.

Autism Alliance of Michigan: Anthony Ianni works as the Community Relations Advocate for the Autism Alliance of Michigan. Anthony Ianni described his goals in life this way, "I want to make a difference in people’s lives, and I want to be able to be that hope and inspiration that people can look at, not just around the state but the nation as well (Source)." One of his roles is to share an anti-bullying message, especially how it relates to bullying towards the autism community.

Anthony Ianni gave this quote to Autism Light on bullying:

Be careful what you say or do to others because they could be the next President of the U.S.A., a great movie star, or maybe the next Lebron James. If you see something, please say something because you can help prevent the bullying from happening and you could also not only change a person's life but possibly save one. Remember we are all different in many ways, but in the end we are all the same because we are created equally and we ARE all people.

Here is a small segment of Anthony Ianni presenting his anti-bullying message for Howell Public Schools in Michigan.

Governor's Michigan Autism Council: When Michigan Governor Rick Snyder established the Autism Council in 2012, Anthony Ianni was appointed to join the 12 member council as a representative of the Autism Spectrum Disorder community (Source).

Autism Light asked Anthony Ianni if he had any encouragement for the autism community and he said,

People ask me all the time if there were days when I wanted to roll over and quit either because things were getting too hard, people always picking on me when I was younger, or if me having Autism was too much. Every time I heard people telling me I can't do something or I wouldn't be successful, I would take that negative energy and I would feed off of it. So I was too busy and very focused on accomplishing the things I wanted to do. Not to mention the words Never or Can't were apart of my vocabulary. I would never use my Autism as a crutch in my life. It's just something I was proudly born with and using excuses are not good things for people to use or say. If you have dreams or goals you want to achieve in life. Go for them, you may have people telling you that you can't, won't, never be good at anything in life. But all you need is motivation, support from great friends and family, and to work hard you'll get to your goals and dream. Reach for the stars because they're not hard to reach for. I've reached and touch the stars many many times in my life and I'm not done reaching for more stars in my life.

Here are some news articles written on Anthony Ianni's success.
Special thanks to Anthony Ianni and all he is doing for autism in Michigan. We believe that with his continued hardwork his impact will continue to be a ever growing light for autism. Anthony Ianni's post at Autism Light will be linked to the page with all those who Have Autism and also the Autism Light Sports Page.