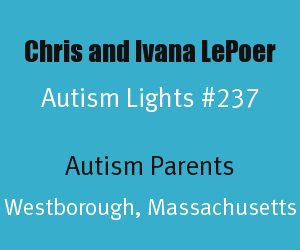 Today's Autism Lights endured a tragedy that no parent should ever have to face. And their constructive response to their loss will potentially be helpful to the future of autism research. Chris and Ivana LePoer are autism parents from Westborough, Massachusetts. Their 4 year old son Alexie LePoer had autism and tragically died from a pool drowning when he wandered away from his apartment on May 13, 2012--Mother's Day. Chris and Ivana LePoer are Autism Lights because after their son's death they quickly donated his brain to the Autism Research Foundation in time for it to be of use for autism research.

After he was diagnosed with autism and before his death, Alexie's parents were engaged in trying to help find answers to the mystery of autism. Chris LePoer said, "If some stranger came into your house and hurt your child, you'd want to know why. It needs to be understood. It needs to be stopped (Source)."

To help make a difference, Chris and Ivana LePoer enrolled in a research study of autism focused on younger siblings, a project overseen in part by Dr. Margaret Bauman at the Lurie Center for Autism in Lexington. After their son Alexie's untimely death they made the ultimate contribution by donating his brain to the Autism Research Foundation.

Sharon Henderson, a friend of the family said, “The family is dedicated and committed to finding answers to this terrible condition that affects so many of our children (Source)."

The Autism Research Foundation stores brains at the Harvard "Brainbank", formerly called the Harvard Brain Tissue Resource Center. Alexie's four year old brain is the youngest ever received by the Autism Research Foundation for study. Note that Alexie LePoer's brain was not part of the group of brains from the Brainbank that were found to have tragically thawed and become damaged on May 31, 2012 (Source).

When Chris LePoer learned that his son's brain was not harmed in the Brainbank's tragic loss of a group of autism brains he said, "It's kind of a mixed bag. I'm just grateful he'll be able to continue to help in this horrible situation (Source)."

Special thanks to Chris and Ivan LePoer for donating their son's brain for autism research. We mourn the loss of this little boy with autism along with his parents, but are appreciative that they had the unselfishness to allow their son to be part of autism research after his death.