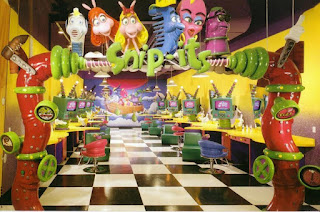 Snip-its is a kids hair salon with 26 locations across the United States. It was founded by Joanna Meiseles in 1995. Snip-its' corporate office is in Eden Prairie, Minnesota. Snip-its is an Autism Light because they have devoted the effort to train their employees on the special needs surrounding the experience of cutting hair of children with autism.

A reason that Snip-its is so deserving to be an autism light is that, "All of Snip-its' stylists are certified to work with children with autism and other special needs, including sensory issues (Source)." Autism Speaks also lists Snip-its as a Family Services Resource on it's website.The following is a training guide that Snip-its developed in partnership with Autism Speaks and Melmark New England.

To find out more about Snip-its visit their website at www.snipits.com. You may also read the following articles on how local franchises are adopting the corporate culture at Snip-its of being autism friendly.

The following is a news story on the Snip-Its in El Segundo, California helping children with autism (Source).

Special thanks to Snip-its for being an Autism Light. Snip-its provides a valuable service by making it easier for children with autism to get their haircut.

Note: Autism Light is a neutral blog and we have no relationship to the business featured in this post nor have we received any return of goods or services for writing this post.

Photos: The logo and photos in this post were used with permission of the Snip-its corporation.
Posted by Alan Stokes at 2:10 PM