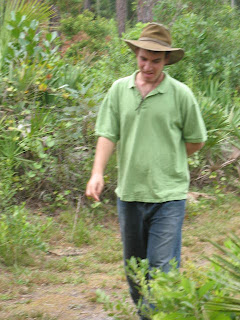 Joshua Banks was raised in Jupiter, Florida and now lives in Jensen Beach, Florida. He is an artist who also has autism. Joshua Banks is an Autism Light for the way he expresses his amazing gifts through a special art form which is done with markers.

Joshua Banks has been described as, "A 24-year old young man with autism who enjoys music, gymnastics, hiking and horseback riding but doesn't speak, he discovered this art form when his mom packed some markers to channel his abundant energy during evacuation from a hurricane (Source)." Joshua is nonverbal and is working on using an iPod Touch to aid his communication with others. He also uses gestures and some vocalizations.

His parents wrote that, "It always seems that art provides Josh a focal point to his day and to his physical space, it's a visible expression of his joyful personality. His parents prefer that he be recognized for his abilities, which include a joyful means of expressing himself and transcending multiple challenges."

Joshua was first encouraged to prepare for an exhibit by Texas art professor and international fine artist Mari Omori; several other artists have since admired the quality of his work.  Joshua uses markers to create his artwork. Here is a photo of one of his pieces. 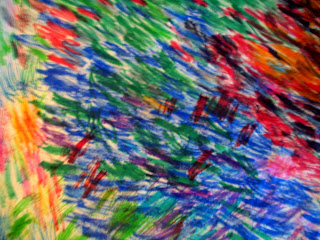 
Photo: The photos in this post were used with permission of Vicki Silver.
Posted by Alan Stokes at 9:14 AM