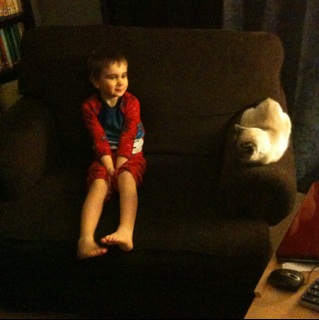 Richard was non-verbal at age 4.  His father wondered if a pet might help him. After bypassing a dog, Richard picked a cat out at the animal shelter. His choice was clear because his first spoken word was when he said, "Cat." The family decided on the name Clover for the cat because it was easy for Richard to say (no small feat for a boy with autism). Clover helped Richard grow by being there to listen to him in a non-judgmental manner. Richard grew so much in his life he went on to attend college as an art major.

J. Manerling tells the story of the miracle that Clover brought to his son in an cats.about.com article. For more information read the full article written by J. Manerling at this link.  J. Manerling's story of Clover was also highlighted on the blog called Your Cat Care Guide and the blog called Hemmingways Cat Adventures.

J. Manerling writes this disclaimer about pet therapy at the end of his article.


I would caution that I don't know if pets improve the life of all children with autism. However, there is a great deal of anectdotal material out there, including books of people with autism whose lives have been enriched by domesticated animals such as cats, dogs, and horses. I have known a little boy with autism who is a very different person when he is with his dog. I have a strong suspicion that there is some correlation.

Sadly, the Manerling family cat named Clover has passed on but the true story of her ability to brighten the life of a boy with autism lives on. The story of Clover as shared by J. Manerling is a positive part of the history of cat therapy for people with autism.  Cats.about.com also has more stories on the subject of cat therapy for autistic children. If you want to read about other cats at Autism Light you can search for them with the label "Cat".


Photos:  The picture on the top of this post was taken by Alan Stokes of his autistic son Jonathan and their cat Misty sitting together.  The photo of the 3 cats is courtesy of Grant Thompson.