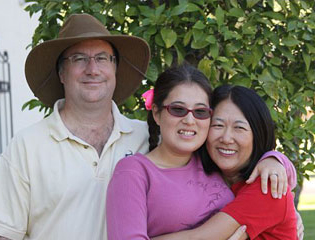 Dr. James B. Adams, Ph.D. is from Phoenix, Arizona. He has a long tenure of serving as a professor of chemistry at Arizona State University and he is currently a President's Professor and the Director of the Autism/Asperger's Research Program at Arizona State University, where he is responsible for ASU's cutting edge autism research. His research has focused on the biological causes of treatments of autism. He went in this direction after his daughter Kim was diagnosed with autism in 1994.

Nightline Presentation:  The following is a portion of a Nightline special on Dr. Adams' story.

I asked Dr. James Adams if there are three things that people who have a loved one with autism would find helpful related to his research.  He noted research has found that these three treatments are helpful to many children or adults with autism.

Autism/Asperger's Research Program at ASU:  Dr. James Adams is the director of the Autism/Asperger's Research Program at Arizona State University.  The AARP at Arizona State University says their "focus is primarily on biomedical issues, including nutritional deficiencies, heavy metal toxicity, and bacterial/yeast overgrowth in the gut."

Dr. James Adams is an Autism Light because his scientific research on the causes and treatments of autism is very helpful to the biomedical area of the autism community. For more information on Dr. James Adams view his full resume available at this link at the website for the Autism/Asperger's Research Program at Arizona State University.

Special thanks to Dr. James Adams for being dedicated to conducting priceless research on autism.  Your time and findings are providing the opportunities for new insights into treating autism.

Photo: Photo in this post used with permission of Dr. James Adams.

This Autism Light post went into syndication at Autisable.
Posted by Alan Stokes at 6:30 AM