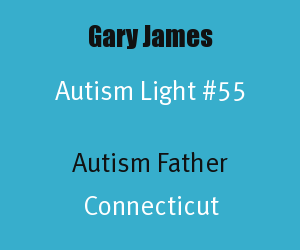 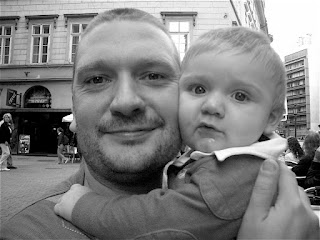 Gary James left his job working for Rolling Stone Magazine after his son Benjamin was diagnosed with autism, in order to dedicate his time to helping families with special needs children.  He first formed a company that located and screened Nannies for families with special needs children. Nannies for Children with Special Needs is a free service of Connecticut Domestics.

Then after seeing what the iPad did to change the life of his own children, he started A4CWSN, which stands for Apps for Children With Special Needs. Through A4CWSN Gary James has quickly become an expert on iPad apps for special needs children and his website had over a million visitors in the span of a year. Gary James says this about the iPad, "from one father to all the Fathers and Mothers out there, if you can afford to get an iPad, get one. It's going to change your life (Source)."

The following video is Gary James being interviewed by Craig Evans at Autism Hangout. Craig Evans was Autism Light #178.  In the interview, Gary James reveals that he feels the tablet technology is the future of education, especially for special needs children.


This quote by Gary James is a practical explanation of why he is so invested in Apps for Children with Special Needs.


Children diagnosed with Autism Spectrum (ASD) particularly need to be taught in a way where they can literally touch the words and watch what the characters do when under their control. Apps on an iPad provide a huge benefit, allowing a match to be made between the pace of reading and interacting that works for an ASD child's unique style and needs (Source).

A4WCSN has had many programs over the years to help families that need an iPad or information on Apps. Some initiatives have been completed and some are ongoing. They including the following:

Social Media: The following are ways to follow Gary James on Social Media or other online areas.
Support: There are many ways too support A4CWSN.  One can give direct donations or purchase products through the links on the A4CWSN page.


Contact: I personally contacted Gary James via his email at gary@a4cwsn.com regarding a technical question before I purchased the first iPad for my son with autism. Gary provided a very quick and helpful response. I had asked him what size of an iPad to purchase and he indicated the entry level with 16G memory will work because one can upload programs to the iPad from the computer as needed, but he said the more memory one can get will make it more convenient.

Special thanks to Gary James for helping special needs children and their families secure the right Apps for their iPad and for helping some of the most needy to receive a free iPad for their child.

Photo: Photo in this post used with permission of Gary James.
.
Posted by Alan Stokes at 8:03 AM