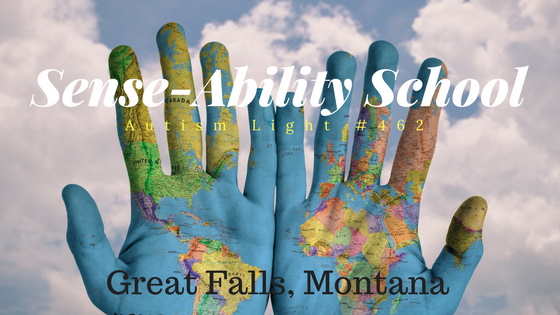 Sense-Ability School for Autism is the first and at this time only private school in the State of Montana dedicated to educating people with autism. The school was started in September 2017 by founders Sharon Altschwager and Rita Rowe-Watson. It is a 501 (c)(3) organization and is located at 1220 17th Street South in Great Falls, Montana. Sense-Ability School is an Autism Light because of their groundbreaking educational program that will help a cohort of students in Montana with autism and also serve as an example for other future schools.

Below is a news story on the beginning of Sense-Ability School.

At the founding of the school tuition was set at $21,000 a year. The school has been organizing regular fundraisers with the goal to provide a scholarship fund to help families with tuition costs. There will be a lead teacher for each group of 4 students and behavioral assistants that work with each student individually throughout the day (KRTV.Com, July 22, 2017). Patty Goodmundson, a licensed clinical counselor and educator for 29 years will serve as the school's first teacher. The school follows the Montana State Curriculum with academics in the morning and life skills in the afternoon, including art, drama, and equine therapy.

It is hoped that students with autism will be able to return to a public school after receiving a few years of help at Sense-Ability School. Rita Rowe who serves as the Vice President of the school said, "Public education system has provided a great service for most children with autism. However, they're are some that their needs just aren't being met, and our goal is to fill in that gap and get those kids ready and back into public school (As quoted by KRTV.Com, July 22, 2017)."

Vision for Future: Sense-Ability has a vision for helping the community as the school evolves in the future. Sarah Dettmer of the Great Falls Tribune reported that Sharon Altschwager, "would like to expand Sense-Ability's offerings to include a one-stop center for people on the spectrum to find resources, counseling, and therapy. But until then, she said her focus is on providing social and emotional support to special needs children (Sarah Dettmer, Great Falls Tribune, October 31, 2017)."

Special thanks to the Sense-Ability School for Autism for being an Autism Light through their specific vision to serve the educational needs of some individuals with autism in Montana. We wish the school great success in the years ahead and hope that it will serve as an example for other autism educational initiatives in other areas of Montana and throughout the United States.