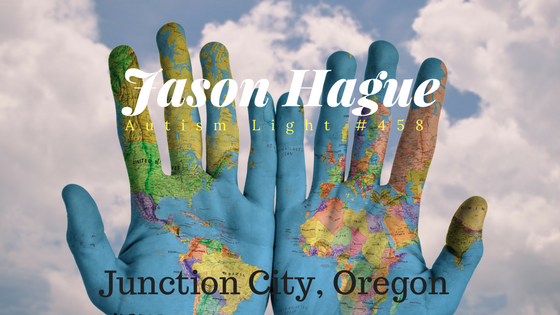 Jason Hague is an autism father, husband, Christian pastor, storyteller, and writer. Jason and his wife Sara have five children, including a 12 year old son Jackson who has autism. Jason is an Associate Pastor at Christ's Church, an independent, non-denominational Christian church in Junction City, Oregon. Jason Hague is an Autism Light for raising autism awareness through his personal sharing of his life online from the honest heart of an autism father.

The following is a poem Jason wrote for his son Jackson which he recites in this video on his YouTube Channel. The version of this video on Facebook went viral and has received 3 million views and counting.


Blogger: One of the best ways to get to know Jason Hague and his life as an autism father in an up close way is to read through his blog posts located at www.jasonhague.com. He wrote a special post on February 6, 2018, called "A Letter to My Autistic Son on His 12th Birthday".  The blog also has letters Jason wrote to Jackson at his various birthdays over the years when he was a growing child.

Jason Hague's blog reveals his emotions as a father that captures the feelings that many autism fathers experience like in this paragraph:


"I often feel the old tug of despair on my sleeve, and the temptation to let it wash over me like it use to: Jack's anguish; his future; our lack of connection. It still gets the best of me from time to time. But on this occasion, the sadness didn't win. It couldn't win. Not after what happened the day before." [Jason Hague, "Let this Carry You", April 26, 2017]

Author: Jason Hague has written a book that will be available in October 2018, about his journey as an autism father for the last five years. It is called Aching Joy: Following God Through the Land of Unanswered Prayer. The subtitle underscores how important faith is in Jason's life, especially in coping with autism.

Social Media: For more information on Jason Hague, follow him at these social media channels.

Special thanks to Jason Hague for being an Autism Light. His storytelling and sharing about autism from the perspective of a father and Christian is a valuable contribution to the autism community. It takes these diverse stories in society to provide living resources to help our world understand more about autism and learn to accept the individuals living with it. We wish Jason Hague all the best in his journey as an autism father and look forward to reading about his blessed family in his blog and writings in the months and years to come.

Autism Light honors diverse heroes to the world of autism.
Posted by Alan Stokes at 11:53 AM