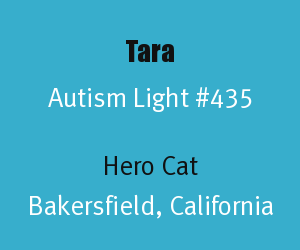 Tara is a family cat who lives in Bakersfield, California. She is owned by the Roger and Erica Triantafilo family. In May of 2014 a dog attacked the family's then 4 year old son Jeremy, who has autism. Tara is an Autism Light because she saw the attack and fought off the dog, saving Jeremy from more serious physical harm.

In May of 2014 a Labrador-Chow mix named Scrappy who lived next door to Jeremy Triantafilo grabbed the boy's leg and started shaking the boy back and forth. Tara ran outside and used her feline body to literally push Scrappy off of Jeremy.  Video surveillance of the confrontation showed the determination of Tara to intervene when the dog was attacking her family.

Here is a news story on Tara the Cat being proclaimed a hero on the Today Show that aired May 15, 2014.

A clip of the encounter between Tara and Scrappy on YouTube went viral and was viewed more than 24 million times (Cat Tara gets Award for Saving 6-year-old Autistic Boy from being attacked by a Dog, Daily Mail, June 19, 2015).

Here is a video of a news story that an ABC News affiliate in Bakersfield, California did with Jeremy Triantafilo about his cat Tara.

Since the attack Tara and Jeremy have developed a closes bond as one can imagine. Special thanks to Tara for helping save Jeremy from a vicious dog. Tara is representative of the many cats around the world who have been an extraordinary shining light for humans with autism. Tara will be the 4th Cat and the 20th Animal added today to the Autism Light Animal Page.

Autism Light honors diverse heroes to the world of autism.
Posted by Alan Stokes at 7:33 PM