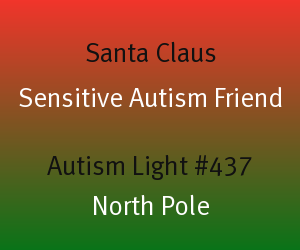 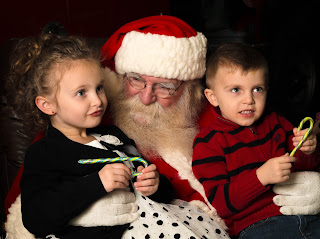 Santa Claus who is also called Father Christmas, Kris Kringle, Saint Nicholas, Saint Nick, and simply Santa is a generous and kind old man who lives in the North Pole. Santa visits the homes of children on the night before Christmas (December 24) to give presents to children. Santa Claus is an Autism Light because of the multiple ways in which his appearance before Christmas Day has brought joy to individuals with autism and their families.

Santa does not discriminate in his giving except for the requirement that someone must have been good during the year to receive a present.  Not everyone believes in Santa Claus, but his story is kept alive by children, friends and family of children, and those rare individuals who are able to remain young in their heart even as they grow older. Just because some people don't believe in Santa doesn't mean he is not real anymore than people not believing in God means God is not real.

We don't know exactly how old Santa really is, but he is older than anyone reading this or their grandparents. Santa Claus gives special permission for his designated representatives to dress like him and gather information on the type of presents children want. Those representatives are allowed to be called "Santa" after an intensive training to reflect the true spirit of the real Santa.

In 2015 there were two specific incidents in the United States where Santa interacted with a child with autism in Michigan and North Carolina and showed his character of being an Autism Light.

Santa in Michigan: Landon Johnson is six years-old and has autism and he visited Santa at the Rivertown Crossings Mall in Grand Rapids, Michigan the first week of December 2015. Landon told Santa he was worried that his behavior during the year caused by his autism might have landed him on Santa's 'naughty list'. Santa told Landon "It's okay to be yourself" (Fox 17 News, Bob Brenzing, Be Yourself: Santa's Message for Boy with Autism, December 7, 2015).

Here is a news story on the impact that Santa had on Landon Johnson's life.

Santa in North Carolina: Brayden Deely has autism and visited the Caring Santa event sponsored by Autism Speaks at the South Park Mall in Charlotte, North Carolina on November 29, 2015. His parents couldn't persuade Brayden to sit on Santa's lap, so Santa got down on the floor to spend time with Brayden (USA Today, Xavier Walton, Santa Lays Down on Floor for Boy with Autism, December 3, 2015). Some beautiful pictures were captured of the encounter.

Below is the news story on the touching impact that Santa had for Brayden and his family.

Websites: You can learn more about Santa Claus at the following websites.
Special thanks to Santa Claus for being an Autism Light. The kindness that Santa and his official representatives have shown to children with autism this year and in the past is a shining light. May we all give to others in the spirit of Santa not just in December but all through the year. Autism Light honors diverse heroes to the world of autism. Photo: The photo in this post is in the Wikipedia Creative Commons and was taken by Bailiwick Studios in Rockford, Michigan.
Posted by Alan Stokes at 8:20 PM