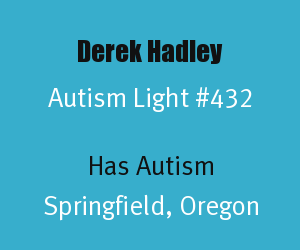 Derek Hadley is a 31 year old man who has autism. He lives in Springfield, Oregon. Derek Hadley is an Autism Light for donating one of his kidneys to his brother Jeff and in doing so setting an example for others within and outside the autism community.

In 2004, Derek Hadley graduated from Springfield High School's special education program. He currently works three days a week making nameplates for the State of Oregon at the Pearl Buck Center in Eugene, Oregon.

Jeff Hadley was experiencing kidney failure due to having abdominal muscle deficiency syndrome and he needed a transplant in 2015. Derek Hadley was a perfect match for his biological brother Jeff, matching all six markers that measure organ transplant compatibility.


Read more here: http://www.kentucky.com/living/health-and-medicine/article49414485.html#storylink=
On October 26, 2015, Derek Hadley donated his kidney to his brother Jeff Hadley at Legacy Good Samaritan Hospital in Portland, Oregon. Dr. John Ragsdale surgically removed Derek's kidney and Dr. Kevin McEvoy performed the kidney transplant. It is very rare for someone with autism to donate a kidney, but Derek was willing to help out.

William Bennett who is the medical director of Legacy Good Samaritan Hospital said, "So, we went to great lengths to make sure this was his [Derek's] free will, and that he understood what he was doing. And he did (Springfield Man with Autism Donates Kidney to His Brother, Lexington Herald-Leader, December 12, 2015)."

When Derek agreed to donate his kidney it followed a period of reflection on the slight possibility of complications from the procedure. He said, "I want to take the risk. Jeff is important to me (Springfield Man with Autism Donates Kidney to His Brother, Lexington Herald-Leader, December 12, 2015)."

Special thanks to Derek Hadley for being an Autism Light. Derek's willingness to donate his kidney saved his brother's life. It also set an example for others who have autism that it is possible to go through the scary process of donating a kidney. We can learn much from Derek's sacrifice.

Autism Light honors diverse heroes to the world of autism.
Posted by Alan Stokes at 3:08 PM

Email ThisBlogThis!Share to TwitterShare to FacebookShare to Pinterest
Labels: Autism, Has Autism, Oregon