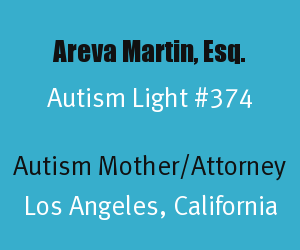 Areva Martin is an outstanding children's and family rights attorney, author, speaker and media personality and an autism mother from Los Angeles, California. Areva Martin's son Marty has autism. Areva Martin is an Autism Light because of the tremendous difference her advocacy is making to shine a light on autism, especially it's impact on minority communities.

Areva Martin said about autism, "It impacts more children than pediatric AIDS, diabetes, childhood cancer; it is the leading childhood disorder. So given the enormous number of children that are going to be impacted, it really requires all of us to become advocates (As Quoted in the St. Louis American, Sandra Jordan, April 23, 2010).

Areva Martin grew up in St. Louis, Missouri. The following biographical video on her amazing life was done by Living St. Louis.

Education: Areva Martin is a graduate with honors of the University of Chicago and Harvard Law School.


Our mission is to raise public awareness of developmental disabilities and to impact public policy while providing education and resources to families, children and adults. SNN serves as a link between under-served communities and mainstream developmental disability organizations and governmental institutions which often fail to address issues specific to these communities. SNN firmly believes that dignity, hope, and opportunity are the birthright of all children (Special Needs Network Website).

Areva Martin's biography at IMDb says that the Special Needs Network "has raised millions of dollars and provided for over 15,000 families in low income communities across California (Areva Martin-Biography IMDb)."

The following is an interview with Areva Martin on her book The Everday Advocate.


Author: Areva Martin is the author of the following books.

Areva Martin also writes advocacy articles for media outlets including one she wrote in November, 10, 2014, for Huffington Post called Children of Color and Autism: Too Little too Late.


Media Personality: Areva Martin is a frequent legal analyst on television programs such as Anderson Cooper 360, Dr. Phil, The Doctors, The CBS Early Show, and Fox News. There are clips of recent appearances she has made on television on the video section of the Areva Martin Website. Other autism features involving Areva Martin include:

Social Media: You can follow Areva Martin on the following social media areas. She is especially active on Twitter.
Special thanks to Areva Martin for her advocacy for autism as an autism mother, attorney, author, and media personality. The ripple effects of her passion and work on behalf of autism can be felt around the United States and beyond. Areva Martin's work is an inspiration to the autism community. May her example light the way for others to serve those with autism, especially to help with the needs related to autism in the African American community.

The photo of Martin Luther King, Jr. in this post is in the Creative Commons of Wikipedia and is from the National Archives and Records Administration.
Posted by Alan Stokes at 8:38 AM