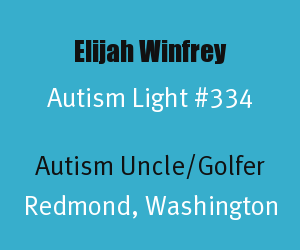 In honor of Martin Luther King, Jr. Day in 2014 we honored a golfer and autism uncle who like the late Dr. Martin Luther King, Jr. is using service as his road to make a difference in the world and to shine a light for autism. Elijah (Eli) Winfrey is a now 42 year old autism uncle and golfer from Redmond, Washington. He is married to Lisa Winfrey and has one son Jordan Andrew Winfrey. Elijah's nephew and niece, who are from his birthplace of Augusta, Georgia, have autism. Elijah Winfrey is an Autism Light because he raises autism awareness, in honor of his autistic nephew and niece, through his leadership at the Seattle Children's Autism Guild, his golfing, and his non profit organization called Team Winfrey.

This post is our 3rd annual feature to honor someone who is an Autism Light in the spirit of Martin Luther King, Jr. Previous people selected for this significant day were:
Autism Light believes that if Dr. Martin Luther King, Jr. had seen the high rates of autism in his day he would been an autism advocate and might have even added to his "I have a Dream" speech a line such as, "I have a dream that little children with autism will one day live in a nation where they will not be judged by the eloquence of their communication but by the messages of their heart."

Eli Winfrey wrote a blog on Martin Luther King, Jr. day in 2012 and said, "As Martin Luther King Jr. said,...You don't have to be famous to be great or to serve. We are all great and we all have a calling to serve whatever it is we believe in. I'm no pro golfer or celebrity with access to millions of people, but if I can spark that one person to stand up and help me, then I know many will follow (Eli Winfrey Blog, Making a Difference, 1/20/2012).

Eli Winfrey said this to Autism Light about autism, "Autism affects 1 in 50 children and it grows every day. We have to all sit down together and continue to figure out ways to help our communities and continue to raise awareness. At the end of the day we are all in this together. We also have to listen, educate and never forget about the moms and dads who also need us."

Golf
Golf Tour: Elijah Winfrey golfs competitively on tour with the Golf Channel. He says that in 2016 he will play in 12 events including Las Vegas and for the first time playing in Florida. He says, "My game is still in the process of getting better (Eli Winfrey Blog, New Year New Goals, 1/1/2016)."  Eli Winfrey told Autism Light that, "The main reason I play golf is to raise awareness for and about Autism. I feel like I represent the autism community whenever I tee it up."

Charitable Causes
Team Winfrey: On January 20, 2012, Elijah Winfrey founded the charity, Team Winfrey. It was launched to "contribute to the health and happiness of our communities by making a personal, meaningful impact on individuals and families (Team Winfrey Facebook Page)." Elijah Winfrey serves as the President of Team Winfrey. In addition to the Elijah Winfrey Open Invitational Golf Tournament, the charity does events like a sensory friendly bowling night, a golf clinic, and distribution of essential supplies to low income and homeless families in Seattle. In 2016, Elijah plans to offer two scholarships to help individuals with autism receive tutoring that will help them graduate from high school. Stay in touch with the charity work at The Team Winfrey Website.

Please support my organization @TeamWinfreyCorp as we have started our summer donation drive to help the homeless. pic.twitter.com/anULRKSlHW
— Elijah Winfrey (@Eli_Winfrey) June 24, 2015

Autism Speaks: Elijah Winfrey has raised funds for Autism Speaks over the years through his golfing and in walking fundraisers, and thus his support of autism service is not limited to his local community but extends to national efforts under the leadership of Autism Speaks.

Website: Be sure and visit the Elijah Winfrey website at www.elijahwinfrey.com to learn more about his work. On his website you can learn about autism and golfing, as well as read his blog.

Social Media: You can follow Elijah Winfrey on the following social media areas.

Special thanks to Elijah Winfrey for being an Autism Light. The legacy of Martin Luther King, Jr. will live on in perpetuity as long as individuals like Elijah Winfrey commit their lives to service. And the burden of autism will be lighter for many when like Elijah Winfrey our service is dedicated to autism. We expect to continue to hear exciting things in the future about the impact of Elijah Winfrey's service for autism.