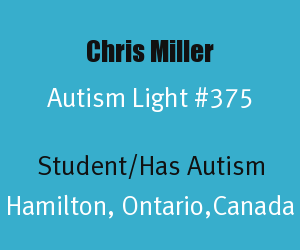 Chris Miller is in Grade 10 at Cardinal Newman School in Hamilton, Ontario, Canada and he has autism.  Chris Miller is an Autism Light because his quick thinking in November, 2014, helped save his neighbor who was crushed by a car.

In 2014 Chris Miller had a stroke that was caused by nephrotic syndrome, a kidney disease. He had been in coma and a neurologist had said he might never walk again or use his arms or legs. But seven months later he was not only recovered from his stroke but he had the strength and skills to be a life-saving hero to his neighbor (CBC News, Adam Carter, January 15, 2015).

In November, 2014, Chris heard a cry for help outside his home and ran to investigate. His neighbor had been doing mechanical work on a car and the heavy vehicle had fallen on top of him. Chris Miller used his quick thinking and ran and grabbed his car jack and used it to lift the car up so his neighbor could get free.

Dean DiFrancesco, the principal of Cardinal Newman School in Hamilton, Canada, said, "Christopher's heroic life-saving actions demonstrate his sense of compassion and his willingness to always do whatever he can do to help those around him - whether it be in the hallways or classrooms at school or in the local community (As Quoted by CBC News, Adam Carter, January 15, 2015)."

Special thanks to Chris Miller for showing the world that someone with autism can truly make a difference and save the life of their fellow human being. His heroic act is an inspiration to the autism community. Chris Miller is representative of the many unsung heroes who have autism and are making a difference in service and compassion within their communities by using their talents and initiative.

Autism Light honors diverse heroes to the world of autism.
Posted by Alan Stokes at 7:47 PM