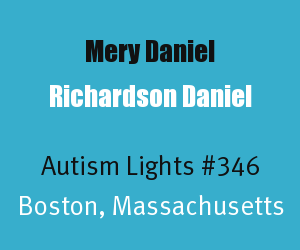 Mery Daniel and Richardson Daniel live in Boston. Mery is a native of Haiti and is a survivor of the Boston Marathon bombing that took place on April 15, 2013. She sustained significant injuries in the bombing and lost her left leg.  Mery Daniel is an Autism Light because on her road to recovery she hand-cycled beside runners and walkers on October 5, 2013, in a 5K race to raise funds for the Charles River Center, an autism organization that her husband Richardson works at. Richardson Daniel is an Autism Light for his dedication as a worker with adults with autism at the Charles River Center.


The Charles River Center (formerly Charles River Arc) is a private, nonprofit human service agency in Needham, Massachusetts, providing employment and job training, residential homes, therapeutic day programs, and recreational programs for children and adults with mental retardation and other developmental disabilities.  Founded by a group of parents of children with special needs in 1956, the mission of Charles River has always been to improve the quality of life by helping each individual with a developmental disability achieve his or her highest possible level of independence so that he or she can fully participate, benefit, and become a contributing member of the community (Charles River Center Website, About Us).

Mery Daniel's recovery is an inspiration to many but she told WCVB, ABC's Boston affiliate before the race on October 5, 2013, "Sunday's not going to be about me. It's going to be about autism (ABC News, Boston Amputee Races for Autism, 9/25/2013)."

Here is another video on Mery Daniel's inspirational recovery to live life with a prosthetic leg.

Inspirational amputee Bonnie St. John is helping raise money for Mery Daniel. Mery has many extra expenses associated with the injuries she sustained at the Boston Marathon Bombing. If you would like to help Mery Daniel visit http://merydaniel.com. There is a Go Fund Me page for Mery Daniel started by Mery's cousin.

Autism Light honors diverse heroes to the world of autism.
Posted by Alan Stokes at 7:48 PM