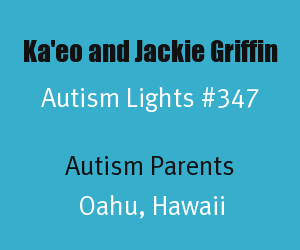 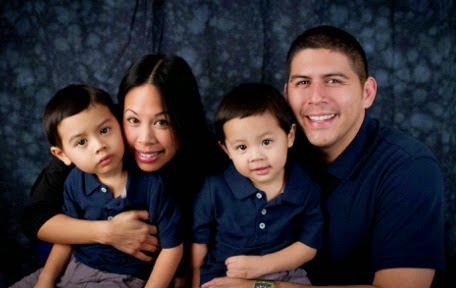 The following is a video of the testimony and song Jackie Maraya-Griffin gave at New Hope Church in Oahu, Hawaii on May 8, 2011 to spread autism awareness.


Christian Faith: Ka'eo, Sr. and Jackie Griffin are Christians and their faith provides them with the confidence that there is a divine purpose for all those with autism. Jackie said,


There is hope and beauty in autism.  You can see it if you choose to.  Every day can be a struggle full of obstacles if we choose to see it that way. These kids are just doing the best they can.  We choose to see our son's challenges as opportunities to express an amazing love and acceptance to him in a way that no one else normally would (Email to Autism Light on 6/4/2014).

Ka'eo and Jackie Griffin have served as the Directors of the Autism Ministry at New Hope Oahu, a Christian church in Oahu, Hawaii.

Musical Theater Performer: Jackie Maraya was a musical theater performer for many years, doing shows such as Miss Saigon in Germany, the 3rd National tour of Rent, and Regional Shows such as the King & I and Flower Drum Song. Jackie took a contract to sing on the NCL Star Cruise Ship in Hawaii where she met, Ka'eo Sr. Jackie gave up being a performer so she could stay home with her son after he receive the autism diagnosis.

Son-Rise Program: The Son-Rise Program was developed by Barry Neil Kaufman and Samahria Lyte Kaufman for their son Raun in 1974. The program continues to be taught by the Autism Treatment Center of America. Jackie and Ka'eo run a home-based, child-centered, play-based Son-Rise Program for their son Ka'eo. They direct a 17 person volunteer team, who they've trained to play with their son Ka'eo in the most loving and accepting way possible, with a goal of connecting with him and building a bridge of trust from his special world into theirs.

The following video is Ka'eo Griffin explaining the great results his son had from the Son-Rise program.


Social Media: You can follow more of Ka'eo and Jackie Griffin's work in these social media areas:
Special thanks to Ka'eo and Jackie Griffin for shining their light for autism in Hawaii. Their son Ka'eo, Jr. is wonderfully blessed to have parents who have walked beside him in his journey by learning principles of the Son-Rise program. And the community of believers at New Hope Oahu is likewise blessed to have such capable coordinators of their autism ministry. If you would like to read other posts at Autism Light on individuals from Hawaii find them by searching the blog for the Hawaii label.

Photo: The photo of Ka'eo and Jackie Griffin and their family is used with permission and taken from their Hawaii Son-Rise website.