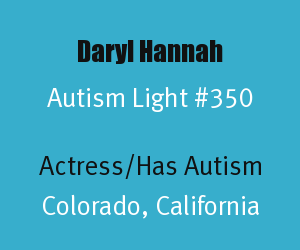 Daryl Hannah is a 53 year old actress and producer who has had roles in over 80 films since 1978, including playing Madison (the mermaid) in the 1984 movie Splash. Daryl Hannah revealed in September, 2013, that she was diagnosed with Autism/Asperger's Syndrome as a child. She was born on December 3, 1960. In recent years she has been an environmental activist and has homes in Colorado and California. Daryl Hannah is an Autism Light for raising autism awareness as a celebrity figure by publicly sharing about her experiences with autism and how it impacted her life.

The following is an ABC News story from 2013, related to when Daryl Hannah revealed for the first time that she has autism.

When she was diagnosed with autism as a child, doctors recommended medication or that she be put in an institution.  Daryl Hannah's mother, Susan Metzger, refused to accept that fate for her daughter. Her mother pulled her out of school for a year and worked with her at home (The Autism Site, Daryl Hannah Opens Up About Her Autism).

Actress: Having autism has made Daryl Hannah shy away over the years from promoting her career through interviews and publicity performances. She feels more comfortable out of the limelight. Daryl Hannah told People Magazine in September, 2013, "I've never been comfortable being the center of attention. It freaked me out (see video above)." Nevertheless, the talented actress has been in entertainment for parts of five decades and has had roles in over 80 films since 1978. Some of her more well-known films include Blade Runner, Splash, Roxanne, Wall Street, Steel Magnolias, and Kill Bill. You can see a complete list of films she has acted in at Daryl Hannah's IMDB page.

The following is an interview Dan Rather did with Daryl Hannah about her autism.


Environmental Activist: Daryl Hannah is passionate about the environment. She has been an activist in recent years for environmental issues in America. Her simple homes in Colorado and California are off the grid.  Daryl Hannah "leads an eco-friendly lifestyle, pumps well water and relies on solar power at home (Huffington Post, Sept. 27, 2013)."

Wikipedia: You can learn more about Daryl Hannah at her Wikipedia page.

Social Media: You can follow Daryl Hannah at the following social media pages.


Special thanks to Daryl Hannah for being an Autism Light. As an exceptional actress, Daryl Hannah's life story is a testimony that some people with autism can be very successful at acting. We wish Daryl Hannah the best in the future and look forward to her future projects in the entertainment industry. The autism community appreciates hearing her experiences with autism.

Autism Light honors diverse heroes to the world of autism.
Posted by Alan Stokes at 6:47 PM