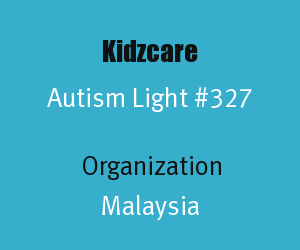 Kidzcare is a non government organization that created the world's first autistic choir comprised of children from the Autism Society of Malaysia. The choir performed at the Dewan Fiharmonik Petronas, Kuala Lumpur on June 28, 2010, in order to raise awareness of autism in their homeland. Kidzcare is an Autism Light for how their leadership with this autistic choir helped raise awareness of autism in Malaysia. Kidzcare becomes the first Autism Light to come out of Malaysia.

The choir's hours of practice were in preparation for a successful performance in front of dignitaries and officials at Dewan Fiharmonik PETRONAS on June 28, 2010, that included as honored guest the Prime Minister of Malaysia's wife, Datain Paduka Seri Rosmah Mansor.  Brian John Yim wrote a song for the choir and directed the 25 member choir through six months of practice. The following is a video of the song the autistic choir sang called, Show Me the Way.

Adam Feinstein explains this about the history of Kidzcare:


Kidzcare, a non-profit, non-governmental organisation, was started in 2010 by a group of individuals interested in helping children in need, and a desire to make Malaysia known as a caring country for kids. They recognised that there were inadequate facilities for children with disabilities in Malaysia and that they could make a positive difference to the lives of Malaysian children who have some form of disability (Adam Feinstein, 'World's First Autistic Choir' Formed, Looking Up, Volume 5, No. 4).


The advertising company Lowe & Partners sponsored the project as part of their 50th Anniversary. The following is a documentary on autism in Malaysia and the achievement of the Kidzcare autistic choir to raise awareness among corporate and government leaders in Malaysia.

Mike Plascow, Kidzcare Foundation's founder said, “The choir demonstrated that people with learning disabilities are gifted and it is a matter of giving them opportunities to realise their full potential (Adam Feinstein, 'World's First Autistic Choir' Formed, Looking Up, Volume 5, No. 4)."

For more information on the autistic choir of Kidzcare read Adam Feinstein's article 'World's First Autistic Choir' Formed in Looking Up, Volume 5, No. 4). Adam Feinstein was Autism Light #321.
Special thanks to Kidzcare for organizing the world's first autistic choir. We honor Kidzcare in this post, and also recognize that the choir could not have happened without the collaberation of many entities such as The Autism Society of Malaysia, Lowe & Partners, Brian John Yim, and Mike Plascow. The acomplishment of this choir is a testimony in Malaysia and to all of the autism community around the world about the potential of children with autism.

Autism Light honors diverse heroes to the world of autism.
Posted by Alan Stokes at 9:59 AM