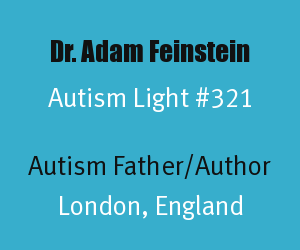 Adam Feinstein is an autism researcher, author, and journalist who lives in London, England in the United Kingdom. Adam Feinstein's 20 year old son Johnny, who has autism, inspired him to enter the field of autism research almost two decades ago. Today Adam Feinstein is a recognized international leader in autism with his influence being felt far beyond his homeland in the United Kingdom. Dr. Adam Feinstein is an Autism Light for being a leading researcher on autism and helping the autism community understand autism through contemporary research and analysis of the history of those who have contributed to the cause of autism.
The following is a two part interview that Alison Singer of the Autism Science Foundation conducted with Dr. Adam Feinstein at the International Meeting for Autism Research (IMFAR) in 2010.

Autism Cymru: Adam Feinstein works for Wales' National Charity for Autism called Autism Cymru. His duties at Autism Cymru include two very important roles:
Newsletter: Dr. Adam Feinstein serves as the editor of an international autism newsletter called Looking Up, which has the latest reasearch and news on autism from around the world. Looking Up is a monthly 40 page newsletter. Looking Up describes their work as, "Aimed at parents and professionals alike, it is a lively and informative mix of the very latest findings in autism resarch from around the world and articles which explore the imapct of autism in all areas (Looking Up Website)."
A History of Autism: Conversation with the Pioneers: In June, 2010, Adam Feinstein published with Wiley-Blackwell a groundbreaking book called A History of Autism: Conversations with the Pioneers. Dame Stephanie Shirley financed the research of the book. The Autism Light blog is very grateful for having been able to reference information in A History of Autism: Conversation with the Pioneers in order to help write some of the Memorial Roll posts on autism heroes of the past who have passed on.
Dr. Adam Feinstein also speaks on autism around the world and has been featured regularly on the BBC and in the Guardian. If you want to read more about Dr. Adam Feinstein's ongoing work, you can read his blog at http://adamfeinstein.wordpress.com. You can also contact him at the email address of editor@lookingupautism.org
Social Media:  You can follow Adam Feinstein at the following social media areas.
Special thanks to Dr. Adam Feinstein for being an Autism Light. His leadership and writing on autism research is a priceless aid for those charged with putting together pieces of the puzzle of autism. Adam Feinstein's work helps the autism community understand the past and present in order to offer constructive hope for improving the future.
Autism Light honors diverse heroes to the world of autism.
Posted by Alan Stokes at 9:29 PM