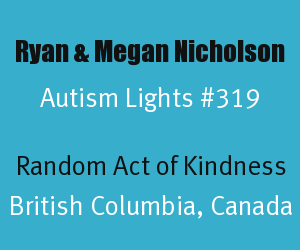 Ryan and Megan Nicholson are from British Columbia, Canada.  Nathan Antone, a 12 year old boy with autism, had his bicycle stolen in front of the Maple Ridge Library on November 12, 2013. Although the Nicholson's did not previously know Nathan Antone, they decided to help out when they heard of his loss. Ryan and Megan Nicholson are Autism Lights because when they heard that Nathan Antone had his bicycle stolen, they purchased him a new bike, along with a light and lock on November 15, 2013.

In explaining his rationale for buying the bicycle, Ryan said, "Somebody did something very nice for me and I am just paying it forward so to speak. I think if more people did nice things to even strangers, it would just make the world a better place (Huffington Post, 11/16/2013)."

For more information on this Random Act of Kindness from Ryan and Megan Nicholson read these news articles:

Special thanks to Ryan and Megan Nicholson for being Autism Lights. The kindness they offered a boy with autism who lost his bike is an inspiration. It is hoped that this brief Autism Light feature will encourage others to commit random acts of kindness toward people with autism that may suffer injustices.

Autism Light honors diverse heroes to the world of autism.
Posted by Alan Stokes at 12:48 PM