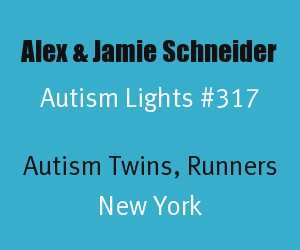 
Alex and Jamie are both nonverbal and because of the severity of their place on the autism spectrum, a guide runs with them in races to help if necessary with the variety of potential obstacles that might take place on a run outside. Both Alex and Jamie look forward to running in races and have their own styles. Alex is the faster runner and is coached by Kevin McDermott and Stephen Dalton. Jamie really enjoys the experience of a leisurely pace as he runs and is coached by his father Allan Schneider. Allan Schneider says about Jamie, "I'll explain to people, there's not a lot I can share with him, but when we're running, it's an unspoken language (ABC News)."

The twins' mother Robyn Schneider offers a reason to The New York Times why her sons enjoy running so much as individuals with autism. Robyn Schneider says, "They thrive on repetition and routine of racing. You finish, get a medal, high-five everyone at the finish line and go home (Autistic Twins Find a Release in Running, New York Times)."

Robyn Schneider said this about the days her sons race.

Race day is always a special and exciting day for us all. My emotions are high as I wait impatiently at the finish line. I watch first, for Alex, and then Jamie.  And as they each approach the finish line, my heart pounding rapidly; I tearfully cheer, and think of how proud I am of their accomplishments.  After the race, as we celebrate among the crowd of runners, many will approach them and offer congratulations and high fives. How grateful we are that we have discovered the gift of running (Autism Runners)!

Other Activities: Alex and Jamie participate in other activities, including horseback riding, fitness exercise, bicycling, swimming, and learning piano (Beyond Running, Autism Runners).

Social Media: You can follow Alex and Jamie's accomplishments on the YouTube Channel of Autism Runners.
Special thanks to Alex and Jamie Schneider for being Autism Lights. Their successful experience in running offers another light on autism awareness. We hope that Alex and Jamie will keep on running.

Autism Light honors diverse heroes to the world of autism.
Posted by Alan Stokes at 7:35 AM