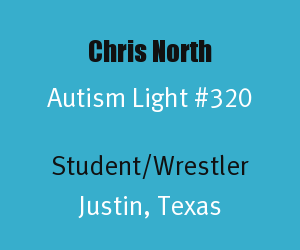 Chris North is a Junior at Northwest High School in Justin, Texas, which is near Ft. Worth, Texas. Chris North met Alex Chapell, a 15 year old who has autism, on November 15, 2013, at a high school wrestling tournament. After the tournanent Chris North gave his silver wrestling medal he had won to Alex Chapell. Chris North is an Autism Light for this special act of kindness towards a peer with autism.

Alex Chappell loves wrestling and he had previously only competed in the Special Olympics until his first meet for the Frisco Wakeland High School junior varsity team on November 15, 2013. Alex lost both of his matches, but the kindness of a wrestler from a different team named Chris North made a tremendous difference in his life.

After he received his silver medal for winning 4 matches in the tournament on November 15, 2013,  Chris North went across the gymnassium and found Alex Chapell to give him his medal and as he gave it to him he said, "I won this for you buddy (Winning Athlete Gives Medal to Teen Wrestler with Autism, MyFoxDFW, 11/19/2013)."

Chris North said the reason he gave his medal to Alex Chappell is, "He looked like a really nice kid who deserved a medal, and he deserved to feel like he won (Winning Athlete Gives Medal to Teen Wrestler with Autism, MyFoxDFW, 11/19/2013)."

The reaction of Alex Chappell and his family to this special gift from Chris North was one of gratitude.
For more information on Chris North and Alex Chappell read the MyFoxDFW story called Winning Athlete Gives Medal to Teen Wrestler with Autism.

Autism Light honors diverse heroes to the world of autism.
Posted by Alan Stokes at 6:30 AM