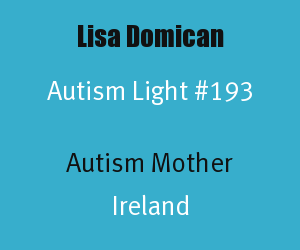 Lisa Domican is from County Wicklow, Ireland. Her two children Liam and Grace have autism. Through her efforts to communicate effectively with her non verbal children with autism she developed a simple picture communication App for the iPad, iPhone, and iPod touch called the Grace App after her daughter who inspired the App.  Lisa Domican is an Autism Light for helping countless autism families communicate more effectively through the Grace App.

The goal of Lisa Domican's company Grace App Communication is to provide an alternative for independent communication that is affordable, accessible, and adaptable. In 2010 Lisa Domican won an Irish Web Award and a United Nations World Summit m-Award for the Grace App. In 2011, Lisa won the Woman Mean Business Big Idea Award for Grace. She was also named one of the "100 Unseen Powerful Women Who Change the World" by One World Action and David Manley Social Entrepreneur of the Year, 2012.

Lisa Domican describes the Grace App in the following way:


It is designed to allow the user to enhance their own picture vocabulary by taking and adding pictures with the device camera or by searching and saving them on the web. The Grace App system encourages the user to approach and engage a listener, in order to have the “sentence” they have created read out loud, together. The Listener can pause and allow the user to try to say each word, and praise them for any attempt at vocalisations with extra rewards. The pictures serve as a prompt for the user, to help them remember a word, and as their speech develops it ensures that they are always understood and rewarded, which encourages further communication.

The following is an appearance that Lisa Domican had on The Morning Show for TV 3 in 2010.


App developer Steven Troughton-Smith did an amazing job on the technical development of Lisa Domican's ideas for the Grace App becoming a usable App. Lisa Domican gives this explanation of why she started Grace App Communications.

Grace App was inspired by my severely autistic daughter Grace and her unique ability to get what she wanted using pictures. She has learned to talk independently as a result of using Grace App consistently and after 11 years I got to hear my daughter call me “Mummy.”

I started the company "Grace App Communication” when I realised there was a need for a simple and accessible training system to teach your autistic child to get what they want without resorting to inappropriate and anti-social behaviour. After 10 years of study and practice in Autism - I have the real life experience and the knowledge to impart to try and make life easier for other parents.

The process of getting a diagnosis, getting access to services and learning to be your child’s own teacher can take years and I want to enable parents and carers especially, to start helping their child from the moment they suspect there might be an issue; any time of the day or night, anywhere in the world. For this reason I am planning a Grace App Training App. One download with a step by step guide to prompting and developing appropriate communication for people with autism and speech delay.


Website: Visit the website at www.graceapp.com for more information on Lisa Domican's work and how you can purchase the Grace App for the affordable price of €20/$25 for one download that can be installed on up to 5 devices. The website also includes a blog that Lisa Domican writes.
Autism Light Connection: Lisa Domican has a connection to two previous Autism Lights.

Social Media: You can follow Lisa Domican and the Grace App on the following social media areas:
Special thanks to Lisa Domican for being an Autism Light. We expect to hear continued good news about how the Grace App is helping more and more families with autism in the future.

Photos: The photos in this post were used with permission of Lisa Domican.
Posted by Alan Stokes at 12:33 PM