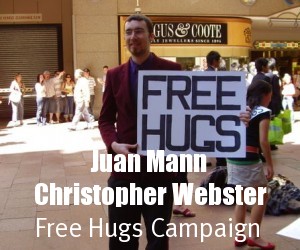 Juan Mann founded the Free Hugs Social Movement in 2004 in Australia. Since then the practice of offering free hugs to strangers has spread to other great cities of the world, including San Antonio, Texas, where a young man with Asperger's named Christopher Webster has been involved in the campaign for six years. Free Hugs founder Juan Mann and participant Christopher Webster are Autism Lights because of the way the Free Hugs Social Movement brightens peoples day, including having changed Christopher's life by helping him leave his comfort zone in social reactions.

Christopher Webster provides an average of 22 free hugs on a typical Saturday at his post across from the Alamo Plaza in San Antonio, Texas. He holds a sign that says, "FREE HUGS" and has the opportunity to meet dozens of new people. The practice is out of the comfort zone for most people with Asperger's and the experience has had a profound impact on Christopher Webster's life. Since beginning the free hugs, Christopher has had life improvements, such as the determination to start taking college computer system courses (Source).

Christopher Webster said regarding his experience in the Free Hugs Campaign, "It was stepping out of my comfort zone. Once it started, it became natural. I do it to make the world a better place. One hug at a time (Source)."

Here is the official video of the Free Hugs Campaign, featuring Juan Mann. It's a video that has received over 72 million views on YouTube.

For more information on Christopher Webster involvement in the Free Hugs Campaign read these online articles. You can also see photos of Christopher Webster at these links.
Special thanks to Juan Mann and Christopher Webster for sharing free hugs and making the world a brighter place for people. Never underestimate the power of a hug, especially when it comes from someone with autism.


Photo: The Photo in this post is in Wikipedia Commons and authorized for use by the author Miles Li.