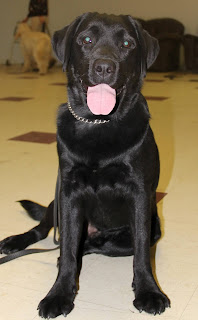 Elf Butler Modaff is a black lab dog who lives with the Butler Modaff family in La Crescent, Minnesota. Elf is an Autism Light because he is a trained autism service dog who is helping protect a boy named Caden who has autism. His specific mission is to keep Caden from wandering off on his own and to find him if he does wander.

Elf was trained by 4 Paws for Ability in Ohio. 4 Paws for Ability trains dogs to help with special needs and has a special program for autism assistance dogs. Elf has a special second buckle on his collar that can be attached to something Caden has with him such as a backpack. Elf has been trained to sit or lay down if necessary to keep Caden from wandering off on his own. Should Caden go missing Elf is also trained as a search and rescue dog to specifically track Caden.

The following is a news story on Elf done by WKBT.com (News 8) in LaCrosse, Wisconsin.

For more information on black lab dogs like Elf visit the Wikipedia page for Labrador Retrievers. Special thanks to Elf and all the autism service dogs who are making a difference around the world. If you liked this post you may like to read about other Autism Lights with the label "Animal".

Photo: The photo in this post of Elf was used with permission of Jennifer Butler Modaff.
Posted by Alan Stokes at 7:21 AM