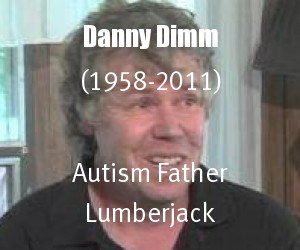 Danny Dimm was a logger from Lillooet, British Columbia. He was the father of a five year old boy named Timber who has autism. Danny Dimm was born on February 25, 1958 and died in a logging accident on October 3, 2011 at the age of 53. Danny Dimm is being made an Autism Light posthumously for the various efforts he made during his life to be the best father possible to his son. His tragically shortened life is a reminder that autism fathers should treasure every day as a gift because there are no guarantees about the future. Danny Dimm is also being added posthumously today to the Autism Light Memorial Roll.

Danny Dimm's online death notice is available at this link. The memorial website for Danny Dimm describes him as "a man of simple directness, with a huge gentle heart" and says "the motivation for his life became his beloved son, Timber (age 5) (Source)."

In an interview with CFJC News prior to his death, Danny Dimm said that he wanted to give his son, "every opportunity that I can. Every kid is special to their parent. Timber has some huge gifts and if I do it right he can make a major contribution to the world someday because his intellect is giant."

Update: Three months after Danny Dimm's death, Wendy Frazier wrote an update on what happened to Danny Dimm's son for the Lillooet News.

Social Media:  You can visit the Memorial Page on Facebook called Remembering Danny Dimm to show your support for the memory of Danny Dimm.

Danny Dimm put forth a heroes effort to help his son receive an appropriate education for his autism at a time in his formative years when it was needed. Some of his challenges were like many autism fathers face and some were unique to his family, but as we remember Danny Dimm it is his love for his son that universally applies to other autism fathers and inspired his personal choices he made to help Timber. May Danny Dimm R.I.P. and may his example of fatherhood inspire others.


Photo Image Source is the Remembering Danny Dimm Facebook Page.
Posted by Alan Stokes at 8:36 AM