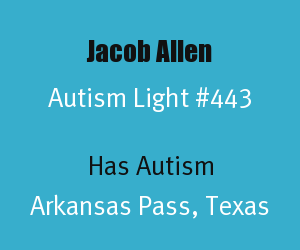 Jacob Allen is 4 years old and has autism. He lives in Arkansas Pass, Texas. On January 1, 2016, Jacob found his father Bryan Allen passed out from a diabetic attack and proceeded to get himself dressed and go to a neighbor for help, because his mother was at the store. Jacob Allen is an Autism Light for his mature thinking that helped save his father's life.

Doctors indicated that Bryan Allen could have went into a diabetic coma if he hadn't receive timely emergency medical attention. Below is a video of the news coverage on Jacob getting help for his father.

Jacob Allen's mother Michelle Allen said, "I have been ...told...not to expect very much of my son because he's autistic. Autistic kids...They're the same as everybody else. And they can be more miraculous than a regular person (KRISTV.com, Caroline Flores, January 1, 2016)."

Bryan Allen expressed his gratitude by saying of Jacob, "He's just the greatest...little kid there is. I wouldn't change him for nothin' (KRISTV.com, Caroline Flores, January 1, 2016)."

Special thanks to Jacob Allen for being an Autism Light. Jacob is one of many cases where individuals with autism made a difference for good in their families and communities. We wish Jacob all the best and hope he will continue to learn and grow in his life.

Autism Light honors diverse heroes to the world of autism.
Posted by Alan Stokes at 8:13 PM

Email ThisBlogThis!Share to TwitterShare to FacebookShare to Pinterest
Labels: Autism, Has Autism, Texas