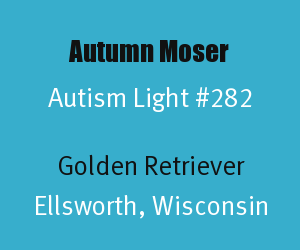 On the afternoon of Tuesday, July 3, 2012, a little boy named Scott Meyer went missing from his Pierce County, Minnesota home. Scott Meyer was 5 years old at that time and is nonverbal because of his autism. The community searched for 20 hours to find the boy and were concerned because of the hot weather at the time. Jason Moser had his Golden Retriever Autumn come with him as he searched for Scott. At about 8am on July 4, 2012, Autumn led his owner Jason to an area hidden under a tree near a small slope where they found Scott Meyer about a half a mile from his home but near a dangerous body of water (Source).

The following is a news story on the rescue of Scott Meyer by Autumn and her owner Jason Moser.


After 20 hours of the community searching for the lost little boy it was an 8 year old Golden Retriever with no special search and rescue or other service dog training that eventually helped to find the little boy. A dog that was almost left home because of the heat and no special training. Jason Moser who is Autumn the Golden Retriever’s owner said he decided to bring her in the end because she loves kids and loves giving them kisses (Source).

Special thanks to Autumn and all the talented and loving dogs who are making a difference around the world for autism. If you liked this post you may like to read about other Autism Lights with the label "Animal".