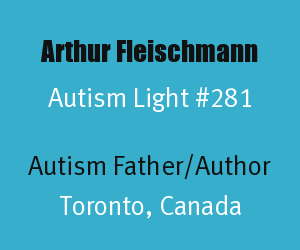 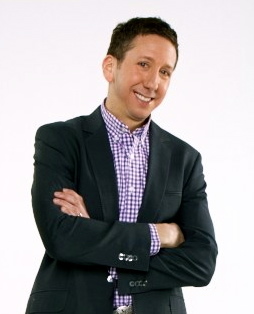 In honor of Father's Day 2013, we wanted to honor a very special autism father who is the co-author of the book Carly's Voice, which tells the inspirational story of his nonverbal daughter.  Arthur Fleischmann is partner and president of john st advertising and lives in Toronto, Canada with his wife Tammy Starr and their children Matthew, Taryn, and Carly. His daughter, Carly Fleischmann, was the first Autism Light and the inspiration for the start of the Autism Light blog. Arthur Fleischmann is an Autism Light because of his dedication as an autism father, and his autism advocacy through speaking and writing about Carly's breakthrough in communication.

Education: Arthur Fleischmann received his B.A. in English Literature and Economics from Brandeis University. He earned an M.B.A. from the Kellogg Graduate School of Management at Northwestern University (Source).

The following is a video where Arthur Fleischmann explains about Telling Carly's Story.

Carly's Voice: Arthur Fleishchmann co-authored the book Carly's Voice. Carly wrote the last chapter of the book and Arthur wrote the rest of the manuscript. It was published in April, 2012. Carly's Voice has been translated into 6 languages and may be ordered from Simon & Schuster and you can read excerpts at Carly's website at http://www.carlysvoice.com/.

Arthur Fleischmann said about his journey in the early years as an autism father: "If we had done what so many people told us to do years ago, we wouldn't have the child we have today. We would have written her off. We would have assumed the worst. We would have never seen how she could write these things —how articulate she is, how intelligent she is (Source)."


His career included stints in sales (Xerox) and marketing (Kraft/General Foods), before deciding on a life in advertising. In starting john st. in 2001, his goal was to create a “creative collaborative” without the silos or bureaucracy or territorialism he’d seen in his previous lives. He believes creativity is a powerful business tool and has led his team to win more advertising effectiveness awards than any other agency in the last decade (Source).

Autism Live: The following is a video where Arthur Fleischmann was featured on the "Let's Talk Autism" segment of Autism Live on June 20, 2012.


Social Media: You can follow Arthur Fleischmann on the following social media areas.
Special thanks to Arthur Fleischmann for being an autism light. His dedication to his daughter Carly and to telling her story is promoting autism awareness around the world. Happy Father's Day to all the autism fathers working hard to make the best possible life for their children. If you wish to read about other autism fathers featured over the years at Autism Light search with the label Fathers.

The photo in this post is used with permission of Arthur Fleischmann.