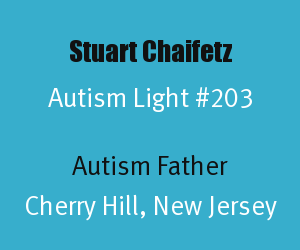 Stuart Chaifetz is from Cherry Hill, New Jersey and is a 44 year old single father of a 10 year old boy with autism named Akian. Stuart Chaifetz has become a father on an anti-bullying mission, since February 17, 2012, when he sent his son Akian to school with a recording device in his bag. The 7 hours of recording picked up highly inappropriate things being said to the child by school personnel. Stuart Chaifetz is an Autism Light because of how he had the courage and insight to investigate his son's learning environment and for how he was willing to take the public risk to become an advocate for anti-bullying measures in the autism community as a result of this experience.

Stuart Chaifetz' son Akian was attending Horace Mann Elementary School in Cherry Hill, New Jersey in the 2011-2012 school year and school officials reported that the 10 year old Akian was becoming violent at school. Stuart Chaifetz felt that there had to be some unknown reason for his son's behavior and as a result he sent his son to school on February 17, 2012, with a hidden recorder to learn about his typical day at school. The shocking information Stuart Chaifetz learned in the recording did not just begin a mission to prevent other children in Cherry Hill, New Jersey from facing similar bullying in the future, but it has had ramifications that can be felt in the autism community around the world regarding the vulnerability to bullying of nonverbal students with autism at the hands of caregivers and teachers.

The following is the video Stuart Chaifetz made in April, 2012 to describe the situation and publically share what he uncovered. It has received over 4.5 million views on YouTube. Despite being understandably disturbed by what his son endured and his passion to protect any other children from being harmed by the school officials connected to the recording, in the spirit of an Autism Light Stuart Chaifetz stresses peace in the description of this video by saying, "Please do not harass anyone!!! I plead with you not to try to contact the teacher or aide or anyone involved with this issue."

Social Media: You can follow Stuart Chaifetz at the following social media pages.

Media Attention: Stuart Chaifetz' story was mentioned by national media, including the following:
You can also see an interview here that Stuart Chaifetz did with CNN.


For more information about Stuart Chaifetz and the ongoing ramifications of his anti-bullying efforts visit his website at http://www.hnva.net/teacherbully/.


Special thanks to Stuart Chaifetz for standing up for his son Aiken and in the process becoming an advocate for anti-bullying for the larger autism community. His efforts are contributing to autism awareness by working to create a positive outcome from a sad and unfortunate situation involving a vulnerable child with autism.  What started with a simple act of sending a recording device to school with his son has become a campaign to raise awareness on bullying of children with autism by their teachers.

Note: This story about Stuart Chaifetz is the first in year 2 of the Autism Light blog. Despite the negative emotions that this story may raise, we believe that this is one of those stories that can lead to a greater good from the positive and constructive efforts of Stuart Chaifetz and others who respond to this unfortunate situation with anti-bullying campaigns and protocals. Although this story is alarming it does not diminish the honor and gratitude owed to the hundreds of thousands of dedicated teachers and other school personnel who are associated only by profession with the details of this story. We are sure those dedicated ones would welcome additional accountability so that the situation is never repeated.
Autism Light honors diverse heroes to the world of autism.
Posted by Alan Stokes at 8:15 PM