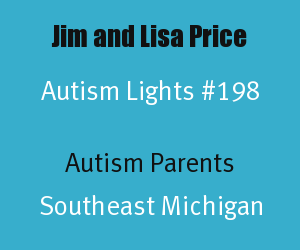 The origins of Jack's Place for Autism can be explained in this information from their website,


After experiencing first hand the difficulties of finding support and resources for their own son, the Prices wanted to establish a vehicle for families to gain access to existing resources and to create additional services that aren't currently being provided to families who are affected by autism (Source).

Autism Light honors diverse heroes to the world of autism.
Posted by Alan Stokes at 8:55 PM