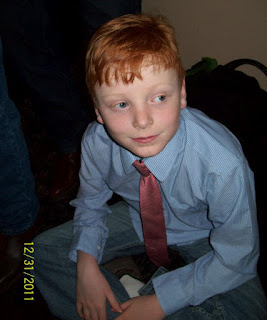 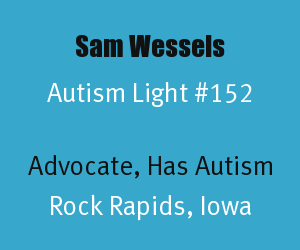 Sam Wessels is from Rock Rapids, Iowa. Sam is 11 years old and was diagnosed with autism on March 25, 2004 at 26 months of age. Sam Wessels has been taught from an early age to be an autism advocate. On the United States' President's Day  2012, we first introduced you to this young man with autism who interacted with the candidates with aspirations of being elected President of the United States in 2012. In the year since then Sam continues to shine his light for autism. Sam Wessels is an Autism Light for the way his self-advocacy for autism resonates and influences others, whether it is through his CNN iReport, his role in an autism documentary movie, or his political advocacy that has resulted in keeping the issue of autism alive on the campaign trail in both the State of Iowa and the United States for two Presidential campaigns so far (2008 and 2012).


CNN iReport: In 2013 Sam Wessels had an iReport nominated for the 3rd Annual CNN iReport Awards.  Called I can help others with autism because I have autism, it was one of just 36 chosen out of 11,000 iReport videos. Sam's  iReport has had over 10,000 views as of May 5, 2013. Watch Sam Wessels iReport at this link.  Sam Wessels' iReport was selected #1 by voters in the category of "Personal Story" for his advocacy work.


Lin Wessels (Sam's Mother) said that, "Sam's out there speaking for kids that have no voice. He's giving a voice to the voiceless (Source)."  Lin Wessels was Autism Light #278 if you wish to read about her autism advocacy.

2012 Political Advocacy: Sam Wessels met President Barack Obama on September 1, 2012. In a brief meeting with the President, Sam asked, "President Obama if he would please join him in standing up for people with autism. He further explained that he himself stands up for people with autism because he has autism, and although he is able to speak for himself, too many people with autism are not and someone needs to stand up for them as well (Source)." For more on this meeting read Lin Wessels complete article on this event written originally for the Age of Autism.

Sam Wessels also met 7 of 9 Republican primary candidates for President in 2012. During the Winter campaign leading up to the critical Iowa Caucus, Sam was able to ask the question "What Will You Do For Autism?" to Presidential Candidates Michelle Bachman, Herman Cain, Newt Gingrich, Ron Paul, Tim Pawlenty, Mitt Romney, and Rick Santorum (you can listen to the responses on YouTube at the links next to each candidate's name). The Iowa Caucus was held on January 3, 2012. In a closely contested race the certified results showed that Sen. Rick Santorum had 34 more votes than any other candidate in the Republican Iowa Caucus (Source). Incumbent President Barack Obama won the Iowa Caucus for the Democrats.

Sam's mother Lin Wessels explains on her Facebook page about how they went about trying to ask questions at various campaign meetings.


...it is no easy feat to first attend any political event with a child with autism in tow, let alone hitting the campaign trail. We have had to drive substantial distances. It takes a good deal of preparation. We try very hard to get there a fair bit in advance to ensure we can get optimal seating. A lot of waiting is involved. It is often crowded, sometimes even overflowing. There is no guarantee of who will get picked to ask a question, if any are even taken. It is a crap shoot. If you are called on, you had best be precise and calculating in your question and even then, a real and true response is rare. BUT, when your child with autism does get called on and NAILS IT, it is exhilarating!! To see him (or her) learning to advocate for himself and others, teaching them about the political process while bestowing in them a sense of something bigger than oneself, it makes me proud beyond measure (Source).

2008 Campaign Advocacy:  Sam Wessels' first Presidential Election to be involved in political advocacy for autism was in 2008 when he was 5 years old. He met Sen. John McCain when he was in Sioux City, Iowa in April, 2007.  As a result of this advocacy, Sam's mother, Lin Wessels, was asked to meet with Sen. John McCain in Washington DC about autism advocacy (Source). Pictures of Sam Wessel's 2008 political advocacy are available on Lin Wessel's "Our Political Advocacy" photo album on Facebook.


Other Blogs: Other blogs and Websites have featured Sam Wessels' story of autism advocacy during the 2012 Presidential Campaign. Visit these posts for more information.
Social Media: To follow Sam Wessel's advocacy on Facebook join the group Something for Sam that is administrated by his mother Lin Wessels.

Sam Wessles seems empowered in his efforts by the realization that he functions higher than some of his peers on the autism spectrum who are unable to speak and need an advocate to speak for them. It is an inspiration to see a young man with autism who is involved in advocacy at the highest political levels. Special thanks to Sam Wessels for spreading his autism advocacy message whenever the opportunity arises through the media or in encounters with influential leaders. Something tells us that in the years ahead we will be updating this page again as we track Sam Wessels autism advocacy and growth as an individual who cares deeply about the range of diverse people on the autism spectrum.

Photo: The photos in this post is used with permission of Lin Wessels.
Posted by Alan Stokes at 9:12 AM