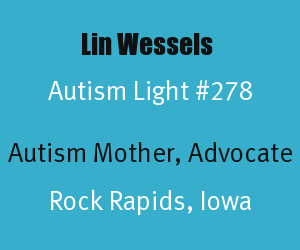 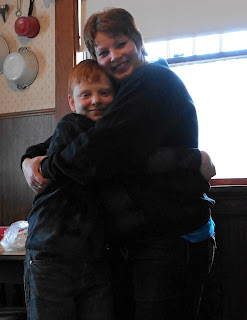 On this Mother's Day we travel to the Heartland to meet an Autism Mother with both heart and passion for autism. Linda "Lin" Wessels is an autism mother from Rock Rapids, Iowa.  She is a public school teacher's aide and is a very busy advocate for autism. Lin Wessels is the mother of Sam Wessels, who was Autism Light #152. Lin Wessels is an Autism Light for her extraordinary advocacy for autism, her decade long work with public school students with autism, and her effective example of empowering her son Sam to become a self-advocate at a very young age.

Lin Wessels is a living example of the positive impact a mother can have on a son, especially one on the autism spectrum. Lin Wessels describes her self this way, "I guess you could say that not a single aspect of my life is untouched by autism. Autism is just kind of demanding that way, I suppose. I don't really see myself as doing anything anyone else can't do or doing any of it better than anyone else.  I firmly believe that if you can, you should. So, I do."

Teacher's Aide: Lin Wessels is a licensed paraprofessional and has worked with students in Central Lyons Community Schools in Rock Rapids, Iowa for the past 10 years. For the most part, her work as a teacher's aide involves working with and assisting students on the autism spectrum.  Lin Wessels said about her daytime job, "While not an easy job by any means, I do love what I do!  I adore my students!!  They touch my heart every single day, in ways I never even dreamed about."

Family: Lin Wessels has been married 13 years to Mark Wessels. They have one son named Sam (See Autism Light #152).

Political Activism: Sam and Lin Wessels have been involved in both the 2008 and 2012 Presidential campaigns and she has talked to both President Barack Obama and Senator John McCain about autism. Lin Wessels said to Autism Light the following regarding her political activism, "I can't say where our political activism will lead us or what may result from it, but I always tell myself that even if the lawmakers do nothing, everyone in that crowd had to hear what we had to say. We are always approached, complimented and commended by someone in the crowd after each event, without fail.  What we do, does matter."

Meeting with Sen. John McCain About Autism: On November 20, 2007, Lin Wessels was invited to Washington D.C. to personally meet with Sen. John McCain. Her advocacy led to Sen. John McCain writing a letter about the need for more autism research to the late Sen. Edward Kennedy who was chair of the Senate Committee on Health, Education, Labor, and Pensions at the time.  At the start of the meeting that Lin Wessels attended in his DC office with autism advocates, Sen. John McCain made reference to Lin's persistence when he stated, "For those of you who are unaware as to how this meeting came to be scheduled, in lieu of having to pay someone to start my car and taste my coffee each morning, I decided it easiest just to hold this meeting." 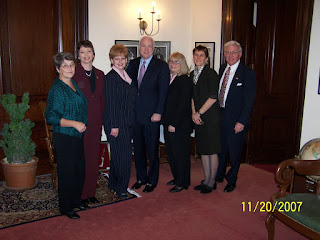 Age of Autism: Lin Wessels has had several writings published by the Age of Autism website. Here are links for two of her writings at Age of Autism.
Poetry: Lin Wessels wrote the following poem called This Most Beautiful Boy after her son Sam had been recently diagnosed with autism.

This Most Beautiful Boy

He's the most beautiful boy there ever could be!

I simply can't know; his mind, you see.

Is it frightening?  Is it bad?

Not knowing is what makes me sad.

I waited so long to have him here.

A gift from Above, I did cheer!

It's been a battle; he's had to fight.

And still to this day things aren't quite right.

Will there ne'er be amend; must this always be his trend?

It is You, Lord, he needs most; his ever present Friend.

I will love him no less, perhaps even more.

For him it's too bad, life's to be such a chore.

What purpose it all shall serve, I have yet to see...

This most beautiful boy, You've entrusted to me.


Social Media: Lin Wessels is active in social media. She said this to Autism Light about her social media efforts,


The vast majority of what I do is advocate and connect with others pertaining to most anything autism related. Whether it be parents or grandparents, educators, doctors, therapists, you name it, we connect and share and brainstorm and help one another. We hold each other up when need be; we rejoice in our loved ones accomplishments, we laugh and cry together.  We share and teach and learn together. Social networks done right can be magical places.


You can follow Lin Wessels at the following social media areas.
Special thanks to Linda Wessels for shining her light for the autism community as she impacts one child at a time, starting with her son. Even as she empowers her son Sam to be a self-advocate, her own autism advocacy is reaching more and more people through her gracious and wise understanding of the world of autism and her dedicated work each day on behalf of the cause.  While autism continues to impact more and more families in the world each day, it is mother's like Lin Wessels who are on the front lines and making a tremendous difference in the battle for services and answers. Happy Mother's Day to all the autism mothers in the world!

Note: If you enjoyed this article you may wish to read the feature for last year's Mother's Day on Eustacia Cutler, the mother of Dr. Temple Grandin or you can search all the posts at the Autism Light blog on mothers.
Autism Light honors diverse heroes to the world of autism.

The photos in the post are used with permission of Lin Wessels.