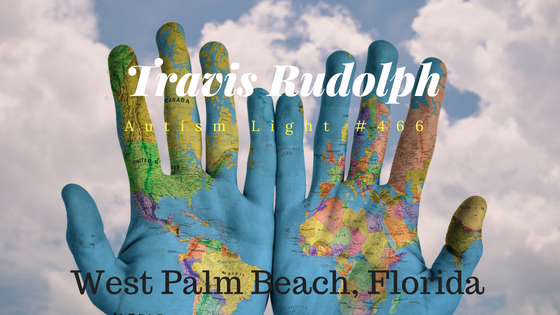 Travis Rudolph is a wide receiver in the National Football League, who has played for the New York Giants since 2017. He was born on September 15, 1995, and is from West Palm Beach, Florida. He played for the Florida State University football team in college. Travis Rudolph is an Autism Light because in August 2016, he was visiting Montford Middle School in Tallahassee with other Florida State players and at lunch he sat next to Bo Paske, a student with autism who was eating by himself. Travis Rudolph will be added to the Autism Light Sports page today.

The encounter Travis Rudolph had with Bo Paske prompted the boys mother Leah Paske to write on Facebook, "I'm not sure what exactly made this incredibly kind man share a lunch table with my son, but I'm happy to say that it will not soon be forgotten. This is one day I didn't have to worry if my sweet boy ate lunch alone, because he sat across from someone who is a hero in many eyes. Travis Rudolph thank you so much, you made this momma exceedingly happy, and have made us fans for life! (ESPN.com, Jared Shanker, FSU WR makes 'fans for life' by eating with autistic student. August 31, 2016)."

Below is the news story that CBS This Morning produced in 2016 about Travis Rudolph and Bo Paske. The photo of the two eating lunch together went viral on social media.

Below is the original heartfelt post on Facebook that Leah Paske posted about how happy she was that her son was eating lunch with Travis Rudolph. After the picture went viral many students wanted to eat lunch with Bo Paske in the subsequent days of the school year.

Special thanks to Travis Rudolph for being an Autism Light and giving special attention and time for a boy with autism named Bo Paske. His example is an inspiration almost two years after his meeting with Bo Paske. We hope that Travis Rudolph's sensitive and caring actions will inspire other star athletes to spend time with children who have special needs. We wish Travis Rudolph all the best in his career in the NFL.


Photo Credit for picture of Travis Rudolph: By Jeffrey Beall - Own work, CC BY 4.0, Link