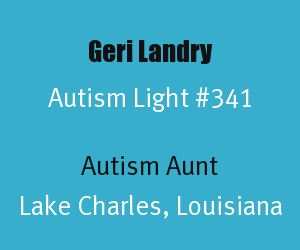 Autism Aunt: Geri Landry's nephew Joseph Sullivan has autism and is now in his 50's. Joseph Sullivan was the autistic man who Dustin Hoffman studied for the movie Rain Man. Her dedication as an autism aunt has provided passion for her to make a difference in autism services in Louisiana.

Geri Landry shared this about a conversation she had with an autism parent, "I had a parent say yesterday to me that no one understands unless they've lived it, what it's like to have a child with autism. And to see them so happy, and happy in that they'll maybe never tell me that they're happy. They don't have to say anything, you can see it. It's such an awesome feeling to see it (FOX 29, House Teaches Autistic Adults Independence, Valen Johnson, 11/18/2013, Video no longer online)."

Special thanks to Geri Landry for using her passion for autism and leadership skills to provide resources for the autism community in Southwest Louisiana. Her foresight to open Creole House for adult living needs is a blessing to many. Geri Landry is a wonderful example of the countless aunts who honor their nephew and neice's with autism by shining a light for autism.

Autism Light honors diverse heroes to the world of autism.
Posted by Alan Stokes at 7:42 AM