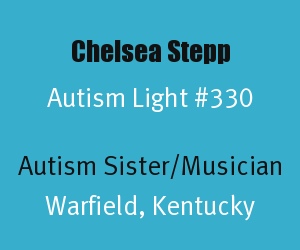 Chelsea Stepp is a 21 year old pop singer and songwriter from Warfield, Kentucky. Chelsea's youngest sister Cammi has autism and she wrote the song Beautiful Blessing in her honor. Chelsea Stepp has been chosen as the first Autism Light for the year 2014, because of her dedication to her relationship with her sibling with autism and her amazing talent in music that is spreading autism awareness.

Here is an interview that Chelsea Stepp did about autism and her admiration for her sister Cammi as it relates to her song Beautiful Blessing.

Here is the song that Chelsea Stepp sings called Beautiful Blessing. It was inspired by her younger sister who has autism and cowrote with Britton Cameron. The refrain includes these words.

Two special comments and tributes to Chelsea Stepp's song came from autism mothers by way of social media.
Website: To learn more about Chelsea Stepp visit her website at www.chelseastepp.com.
Social Media: You can follow Chelsea Stepp on the following social media areas.

Special thanks to Chelsea Stepp for being an Autism Light. Chelsea's music is a blessing to many and the doors her music opens to her for autism advocacy is an inspiration to the autism community.