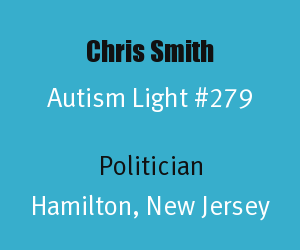 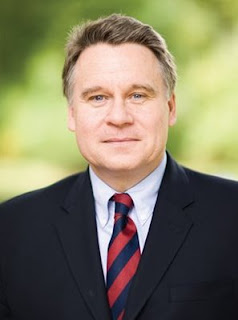 The Honorable Chris Smith serves as a member of the United Sates House of Representatives, representing the 4th District in the state of New Jersey. He has served in the House of Representatives since 1981. Chris Smith was born in 1953 and resides in Hamilton, New Jersey. Rep. Smith's passion to help those with autism has been evident through his long and consistent record of advocacy and leadership on behalf of autism friendly legislation. Rep. Chris Smith is an Autism Light because his political leadership has been a light for the cause of autism.

Here is an interview that Chris Smith did in 2012 with WZBN about his autism work and his concern for the cause.


Family: Chris Smith is married to Marie Smith. They have four grown children.

Initial Advocacy: The beginning of Rep. Chris Smith's work in autism can be traced back to 1998, when he was contacted by  autism parents Bobby and Billie Gallagher of Brick, New Jersey, who had concerns about the number of families with autism in their community. Because of this constituent concern, Smith asked the Centers for Disease Control and Prevention to research the prevalence of autism in New Jersey. While New Jersey has one of the highest rates of autism in the United States, there is evidence now that virtually all communities across the country without prejudice have been impacted by autism.

Autism Legislation: Chris Smith has a long record of support for autism legislation. "Smith’s landmark legislation enacted in 2000—the Autism Statistics, Surveillance, Research and Epidemiology Act (Title I, P.L. 106-310) created the first comprehensive federal program to combat autism. In 2011, another piece of legislation he authored, The Combating Autism Reauthorization Act (CARA),” now Public Law 112-32, was enacted and will provide $693 million to continue federal programs through 2014 (Source)." There is a section of Chris Smith's website that that is dedicated to highlighting all of his autism achievements.

Congressional Autism Hero: Chris Smith received the "Congressional Autism Hero" Award in April, 2013 from Autism Speaks.  Smith said about the award, "We must seek ways for early diagnosis, effective treatment and even hope for a cure someday. There is so much more work to do, but I am especially honored to receive this recognition during National Autism Month (Source).”

Here is a video of Congressman Chris Smith addressing Autism New Jersey's 29th Annual Conference in 2012. In it he discusses the past victories and future goals that he shares for the autism effort.


Other Legislation: Other caucuses besides Autism that Chris Smith has chaired which reveal his social concern include: Pro-life, Alzheimer's, Lyme Disease, Spina Bifda, Human Trafficking, Refugees, and Combating Anti-Semitism. According to the independent watchdog organization Govtrack, Chris Smith is ranked 2nd among U.S. House Members for the amount of legislation that he authored over the last two decades that has made it through the political process to become law.

Wikipedia: You can read more about Chris Smith on his Wikipedia Page.

Social Media: You can follow Chris Smith at the following social media areas.
Special thanks to Rep. Chris Smith for his years of advocacy for autism in the United States Congress. Autism legislation surely wouldn't have passed without the help of heroes like Chris Smith working so hard to break through the political differences in Washington for the cause of autism.

Note: If you liked this post you may wish to read about Sen. Robert Menendez who was Autism Light #54. He is another New Jersey Politician, who has a passion for autism advocacy.

The photo of Chris Smith is in the Public Domain.
Posted by Alan Stokes at 1:07 PM