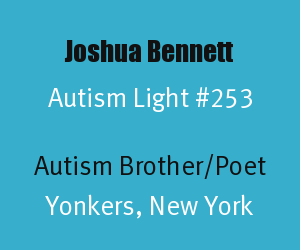 Today on Martin Luther King, Jr. Day we want to honor a fantastic up and coming young poet of our day who like the late Dr. Martin Luther King, Jr. is using his peaceful words to speak out for both social justice and autism justice. Joshua Bennett is a poet from Yonkers, New York who has three disabled siblings. His younger brother Levi has Autism, his older sister is deaf, and his other brother has schizophrenia. Joshua Bennett wrote a poem called "Levi" in order to honor his brother and to draw attention to the plight of all those who are living with autism in our society.  Joshua Bennett is an Autism Light because of the autism awareness his poem "Levi" brings to the collection of the world's greatest social poetry.


The following is the graduation speech that Joshua Bennett gave in 2010 for the College of Arts at the University of Pennsylvania. In the speech Joshua Bennett shares the simple piece of wisdom his mother shared with him that, "People learn how to treat you based on what you accept from them."

Education: Joshua Barnett's website lists his extensive education this way. "An alumnus of the University of Pennsylvania, Joshua graduated with the distinctions of Phi Beta Kappa and magna cum laude, after double majoring in English and Africana Studies. In addition to receiving a Ford Foundation Predoctoral Fellowship, Joshua was also awarded a Marshall Scholarship and earned his Masters of Arts in Theatre and Performance Studies from the University of Warwick in the UK. He is currently pursuing a PhD in English from Princeton University. Joshua thanks God for his gift, and is grateful for, and humbled by, the opportunity to inspire others (Source)."


The following is the Joshua Bennett presenting the poem "Levi" that he wrote for his brother who has autism.

Bennett concludes the poem "Levi" with these piercing words: "Tell them Levi is just shorthand for levitate. That your calling is is to the clouds and you would pay them a lot more attention but you are simply too busy having a conversation with God right now. Then smile for them. Smile big. Smile pretty. Teach their wounded souls how to fly because you were made that way. A genius with jellyfish for words. A divine poem destined for the sky (Joshua Bennett)."

Poetry Experience: The Strivers Row lists the varied venues where Joshua Bennett has presented at:

He was a featured poet on the HBO series Russell Simmons presents Brave New Voices. He has recited his original works at events and venues such as The Sundance Film Festival, The NAACP Image Awards, The Kennedy Center, Brooklyn Academy of Music, Poetry Africa and President Obama's Evening of Poetry and Music at the White House. He has also performed on BBC Radio Oxford, alongside former U.S. Poet Laureates Billy Collins and Rita Dove, at the Du Bois Institute Panel as a guest of Henry Louis Gates, and opened for Dr. Cornel West (Source).


Social Media: You can follow Joshua Bennett on the following social media areas.
Joshua Bennett is a prolific user of Twitter. This is one of his recent Tweets where he shares and inspires.

Small things. At this moment of my life, it's about a clean house and a clean heart. Double emphasis on both.
— Joshua Bennett (@SirJoshBennett) January 15, 2013

Special thanks to Joshua Bennett for using his amazing talent to be an Autism Light. We look forward to hearing more poems from him in the future as he speaks out for social justice and autism justice.

The photo of Martin Luther King, Jr. in this post is in the Creative Commons of Wikipedia and is from the National Archives and Records Administration.
Posted by Alan Stokes at 9:31 AM