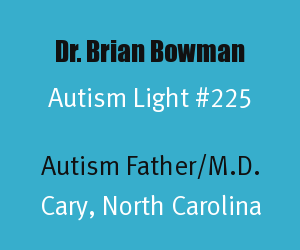 Dr. Brian Bowman was born in St. Louis, Missouri in 1967. He received his M.D. from the Duke University School of Medicine in 1998. He has served as a pediatrician for the Cary Pediatric Center since 2001, seeing patients in their Apex, North Carolina office (Source).

What I like to tell parents is that raising a child with autism is running a marathon. It's not a sprint. There will be a lot of different challenges on the way--turns on the road. Hills and valleys. And sometimes that will seem very exciting and major breakthroughs and sometimes where it just doesn't work. I suggest to parents that they educate themselves, that they understand what resources are available to them.

A portion of Dr. Brian Bowman's above interviewe was condensed into the following Public Service Announcement by the Autism Society of North Carolina.
Special thanks to Dr. Brian Bowman for shining a light for autism in North Carolina as both an autism father and pediatrician.  Dr. Bowman holds the distinction of being the first Autism Light from the State of North Carolina.  If you liked this post you may wish to read about the other Autism Lights who are also physicians by clicking on the "Physicians" label.

Autism Light honors diverse heroes to the world of autism.
Posted by Alan Stokes at 8:01 PM