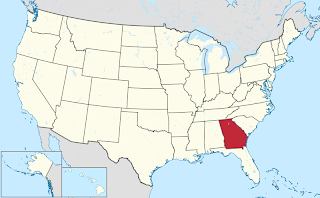 The State of Georgia is the home currently to 9 Autism Lights. They include individuals with autism, autism parents, a professional athlete, animals, and a businessman. The Georgia delegation at Autism Light are outstanding examples of the diversity of autism.

Tom Herrion is an autism father and assistant coach for Georgia Tech.  He is the co-founder of Coaches Powering Forward for Autism. He lives in Atlanta, Georgia.
Animals:
Golden Retriever Puppies of LionPaws are puppies being trained to be services dogs with students with autism at The Lion School in Alpharetta, Georgia.
Xena is from Johns Creek, Georgia and is a Pitbull who is a service dog to Jonny Hickey, who has autism.
Other:

Memorial Roll:
Nancy Herndon Cale (1944-2017) is from Sharpsville, Georgia. She was an autism grandmother who spent decades of her life in advocacy and answering phones at the Autism Research Institute call center.

You may reach all these posts by searching the blog through the "Georgia" Label.

The map of Georgia is in the Wikipedia Commons.
Posted by Alan Stokes at 2:10 PM