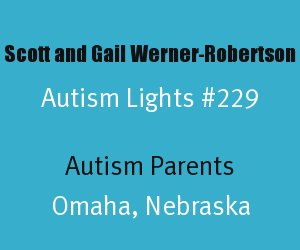 
Gail Werner-Robertson and Scott Robertson, the founders of Autism Action Partnership (AAP), laid the groundwork for Autism Action Partnership in 2000 when they began the GWR Sunshine Foundation. As the parents of two sons diagnosed with autism, they personally experienced the constant challenges and frustrations associated with finding adequate, cost effective treatment services, medical expertise, and basic educational support for their children. Determined that other Nebraska families would not have to endure the same struggles, Gail and Scott began their work to provide support to individuals with autism and their families across the state (Source).


The Autism Action Partnership became a public non-profit organization in 2008.  Gail Werner-Robertson serves as the Chairman of the Board to this day. Gail's motivation for making a difference for autism can be understood in the following statement she made as an autism parent:


"All I ever wanted was for my child to be invited to just one birthday party (Source)."


Scott is a founding board member of the Nebraska Business Aviation Association and sits on the boards of the Mid-America Council of the Boy Scouts of America and the Children's Scholarship Fund. He holds a Bachelor of Science degree in Professional Aeronautics from Embry-Riddle Aeronautical University and resides in Omaha with his wife and four children (Source).

Autism Light honors diverse heroes to the world of autism.
Posted by Alan Stokes at 8:40 PM