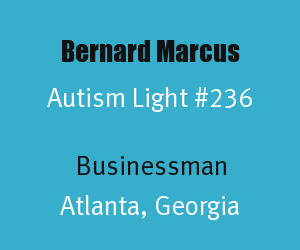 Bernard Marcus is a businessman and the co-founder of Home Depot. Bernard Marcus was born to Jewish immigrants from Russia and now lives in Atlanta, Georgia. Over the years Bernard Marcus has been an Autism Light through his charitable giving for autism treatment and research. In 1991 he founded the Marcus Center for Autism in Atlanta, Georgia, which has helped over 40,000 children and families dealing with autism since it's formation.

Education: Bernard Marcus earned his pharmacy degree from Rutgers University. In 2008, Marcus was given the Honorary Doctor of Humane Letters form Emory University. You can listen to his 2008 Commencement address at Emory University at on YouTube at this link.

Home Depot:  Home Depot (NYSE: HD) is the world's largest home improvement warehouse and has stores in all 50 states of the United States. Home Depot was founded in 1978 by Bernard Marcus, Arthur Blank, Ron Brill, and Pat Farrah (Source).  Marcus served as the CEO of Home Depot from 1979-1997. Although they are self-insured, Home Depot has provided the ABA benefit to all it's eligible full-time employees who have children with autism (Source).

The following video is Bernard Marcus discussing the work of the Marcus Center for Autism. In the video he explains the amazing work being done but also notes they "haven't even scrapped the surface."


Charitable Giving: Bernard Marcus is Jewish and besides children's causes and autism, he also has a passion for supporting Jewish causes through the Marcus Foundation, and he serves as the chairman of that foundation.  Business Week lists Bernard Marcus as one of the Top 50 Givers in America (Source).

Awards:  The following outstanding recognitions have been given to Bernard Marcus.

More Information: For more information on Bernard Marcus you can visit these biographical websites:
Bernard Marcus' charitable interest in autism is making a difference for children in Atlanta and around the country.  In addition, families with autism who work at Home Depot are fortunate to receive a generous autism insurance benefit. Special thanks to Bernard Marcus for being an Autism Light.

Autism Light honors diverse heroes to the world of autism.
Posted by Alan Stokes at 9:31 PM