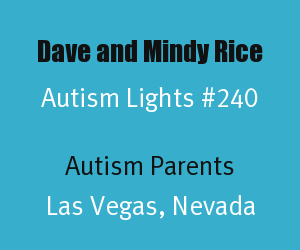 Dave and Mindy Rice are from Las Vegas, Nevada. Dave Rice is currently the head coach of the men's basketball team at the University of Nevada, Las Vegas. Dave and Mindy have two boys and their 9 year old son Dillon has autism. In response to the personal way in which autism has touched their lives they established the Dave Rice Foundation on February 9, 2012 (Source). Dave and Mindy Rice are Autism Lights for their work to make a difference for autism as parents and as creators of an autism foundation.

D.J. Allen, Sr., the Associate Athletic Director at UNLV said, "Anyone who has ever been involved in the life of a special needs child at any level understands the amount of love, dedication and sacrifice that goes into that child to maximize his or her potential. What Dave and Mindy have decided to do is personal. They're not doing this for sympathy. They're doing it because it's the right thing to do (Source)."

UNLV Basketball: Dave Rice was a member of the UNLV Men's Basketball team during the 1989-1990 season, when UNLV won the National Championship. After 11 years as an Assistant Coach for UNLV and one year as an Assistant Coach for Brigham Young University, Dave Rice became the head coach at UNLV on April 10, 2011. In the 2011-2012 season UNLV won 26 games and made it to the 2nd Round of the NCAA Tournament.

Dave Rice Foundation: Here is a video of Dave and Mindy Rice talking about their autism foundation.

According to the Dave Rice Foundation website they are a "non-profit, tax exempt organization dedicated to the education and support of health initiatives including developmental disorders such as Autism, and other charitable causes. The Dave Rice Foundation will be partnering with the UNLV Center for Autism Spectrum Disorders.

Dave Rice said, "The difficulty with autism is that we would go to the doctor and he would ask us what we thought. And I thought, 'Aren't you the doctor?' That was the frustrating part. And with this foundation, the education and awareness will just benefit everybody (Source)."


The following is a video of the press conference when Dave and Mindy Rice announced their foundation for autism.

For more information on the Dave Rice Foundation visit it's website at www.davericefoundation.org
or connect with them through the various methods listed on their website contact area.

Social Media: You can follow Dave Rice and the Dave Rice Foundation at the following social media areas:
Special thanks to Dave and Mindy Rice for starting the Dave Rice Foundation and for being inspirational  public figures who are facing the challenges of being autism parents. The autism community in Nevada is blessed to have this foundation working to make the world a better place for families with autism. There will be a link to this post placed under the "Coach's section" of the Autism Light Sports Page as well as on the Autism Light Foundations Page.

Autism Light honors diverse heroes to the world of autism.
Posted by Alan Stokes at 9:50 PM