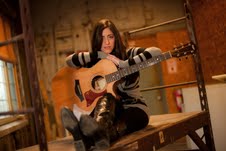 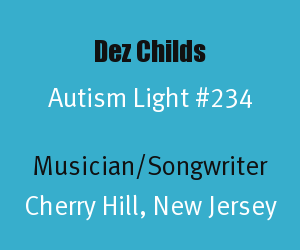 Dez Childs is a contemporary Christian singer and songwriter from Cherry Hill, New Jersey.  Dez Childs is an Autism Light for her contribution to autism awareness through her inspirational autism song called Father Song.  Dez Childs helps us understand autism through the perspective of a talented musician and believer in the Christian faith.

Dez Childs began singing at conventions and festivals when she was just 12 years of age. She was following in her mother's footsteps who had a professional singing career under the name of Gigi Parker. Dez Childs became a Christian believer at age 15 and then started using her musical talent at worship gatherings for the church. Dez Childs is married to Steve Childs. Steve Childs is her producer, and a vocal instructor who is featured on the website www.virtualvoicelessons.net.

The following is a video of Dez Childs singing her autism song called Father Song.  It is about the challenges faced by family members of children with autism. You can purchase the song on iTunes as part of Dez Childs album called Heart Cry. A portion of the proceeds will go to benefit autism organizations.


The lyrics to Father Song were written by Tara Bruce, a good friend of Dez Childs. Tara's son Colin has autism and through this song both Tara Bruce and Dez Childs are able to share the story of Colin's struggle with autism. The song accompanies the autism book Tara Bruce wrote called Why Is Colin Like That?

Dez Childs has received positive reactions to the Father Song in the autism community. She writes to Autism Light:

We have received an overwhelming amount of positive feedback concerning the song. From YouTube subscribers to family members of Tara Bruce, they have all been moved to share the song with others to help create an awareness of this behavioral disorder.

Autism Light asked Dez Childs if she had any encouragement for the autism community.  She shared these words of particular relevance to those who believe in the Christian faith:


Father Song is a simple prayer to God Who is the source of all hope. When families are faced with these kinds of situations it is easy to lose hope. Jesus said that in this life we will have tribulation but to not be afraid because He has overcome the world. There will be a day when there will be no more tears, disease nor death, but in the meantime we are to keep praying for strength to push on.

Music Teacher:  Dez Childs has also served as a music teacher for School of Rock and Musically Speaking Studios (Source). You can vist her website at www.dezchilds.com for more information on her outstanding up and coming career as a musician.

Social Media:  You can follow Dez Childs on the following social media areas.
Special thanks to Dez Childs for being an Autism Light. Father Song is an inspiration to the autism community. A link to this post for Dez Childs will also be placed on the Autism Light Music page today. We look forward to hearing more inspiring things about Dez Childs' work as a musician in the future.

The photo in this post was used with permission of Dez Childs.
Posted by Alan Stokes at 9:04 PM