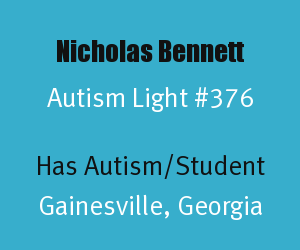 Nicholas "Nick" Bennett is a senior at North Hall High School in Gainesville, Georgia who has autism. Nick has served as the manager of his high school basketball team for four years from 2011-2015.  Nicholas Bennett is an Autism Light for his dedication as a student manager in basketball and for accomplishing an amazing goal with making basketball shots from half court. Because of his accomplishment in basketball shots, Nick Bennett will be added today to the Autism Light Sports Page.

As manager of the basketball team since 2011, Nick Bennett has attended hundreds of practices. He started shooting shots from half court to entertain himself at practice. He set a goal to make 1,000 half court shots. His team and coaches helped him keep track of how many he made over the years. In January 2015, Nick Bennett made his 999 shot.

Basketball Game on January 24, 2015: During halftime of his high school basketball game on January 24, 2015, Nick Bennett made his 1,000 half court shot on the third attempt. Nick also was put in the starting lineup for the game, and made his first shot before being taken out of the game. Nick will go down in the history books at North Hall High School as the only basketball player to have a perfect career shooting percentage.

Nick Bennett told the Gainesville Times after the game, "This was such an exciting experience. It felt like I was in heaven (Fox59.com, January 30, 2015)."

Here is a news story on Nick Bennett's accomplishment.

Future Plans: Bill Murphy reported that, "In addition to his love of music, primarily the guitar, Nicholas has a strong desire to share his Christian faith with everyone he meets. Following graduation, [his father] Tim said his son plans to attend the Gainesville Baptist College & Seminary, an accredited ministry with the Hillcrest Baptist Church in Clermont (Bill Murphy, Gainesville Times, January 25, 2015).

Special thanks to Nicholas Bennett for being an Autism Light. Nick's success on and off the basketball court are an example to others of the amazing things that students with autism can accomplish. We wish Nick Bennett the best of success in reaching his goals in the future. May he continue to be an inspiration of an autism life well lived.

Autism Light honors diverse heroes to the world of autism.
Posted by Alan Stokes at 1:44 PM