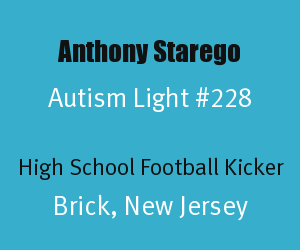 Anthony Starego is a senior at Brick High School in Brick, New Jersey. He has autism and is the place kicker for his high school football team.  Anthony was an orphan at the age of 3 and lived in 11 foster homes before being adopted by Ray and Reylene Starego. Anthony Starego is an Autism Light for his achievements in football and how he has overcome disabilities and disappointments in his life to be an inspiration to others who have autism.

Anthony Starego kicked the game winning field goal on October 19, 2012 in a game where his team Brick High School played Toms River North High School.  Below is a video on Anthony Starego's amazing accomplishment on the football field.
Anthony Starego's coach Kurt Weiboldt said his autism is an asset as a kicker, "Fifty times a day, that's all he does. Just three steps back, one over and he hits the ball. That's what he knows and that's what he did (Source)."
Anthony said this about his experience with football in high school:  "I do the same thing over and over again. It helps me a lot, and I'm having the best day of my life (Source)."

Anthony Starego will be added to the Autism Light Sports page and join some other fine high school athletes who have autism. We wish him the best in his future endeavors as his outstanding attitude, dedication, and talent shines a light for autism.
Autism Light honors diverse heroes to the world of autism.
Posted by Alan Stokes at 10:37 PM