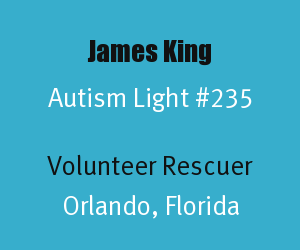 James King is a military contractor from Orlando, Florida. He is married to Diane King and is the father of five children. James King is an Autism Light because on April 13, 2010, he rescued then 11 year old Nadia Bloom from a Florida swamp where she had been missing for four days.

Nadia Bloom has the high functioning form of autism known as Asperger's Syndrome.  She disappeared on April 9, 2010 and it would later be revealed that she had went on a hike by herself and got lost in an alligator infested swamp in Winter Springs, Florida. Search teams had been trying for days to find her. James King went out in the swam by himself on the morning of April 13, 2010 to search for her. When he found her James King used his cell phone to call 911 for help to get Nadia Bloom out of the swamp. Here is a news story on this rescue of a girl with autism done by the Today show in April, 2010.


Visit NBCNews.com for breaking news, world news, and news about the economy

James King proclaimed that God helped him find Nadia Bloom. Norris J. Chumley gave this account in the Huffington Post about how faith helped James King be an Autism Light.


Rescue teams searched for days on foot, by helicopter, and with search dogs, but James King, a volunteer and member of Nadia's church, began to pray while searching. On ABC's Good Morning America, King said, "I prayed and prayed, and God showed me the way. The hardest part of it was getting out of my own way; putting my own thoughts aside and listening to God." Appearing on NBC's Today Show, King confessed to Meredith Vieira that his wife, Diane King, gave him advice the night before joining the search, "James, when we lose something we pray in the spirit and we always find it.(Source)."

Tanya Bloom, Nadia's mother said, "'Thank you' is not appropriate for what James King did. We are so fortunate God used him to bring her back to us (Source)."

For more information on this rescue on April 13, 2010, see the following news stories

Special thanks to James King for being an Autism Light and helping find Nadia Bloom when she was missing in 2010. When hope was diminishing for Nadia, James King armed with his faith and courage went searching for her. We wish both James King and Nadia best wishes in the years ahead.